I promised myself that, when I bought a box of Swiffer WetJet refills at the wholesale club, it would be the last box I bought. Something had to be done. Now, to be honest, part of the reason was to help the environment, but the other part was because I was tired of running out of those darn things.

I took some towels, folded them in half cut them into 5" widths. (The towel was just about 25" or so from side to side when flat.) Then I cut two 5" pieces of elastic and serged it all together. Two layers of toweling and two elastic strips. That's it. (The finished piece was approximately 4.75" x 12.") 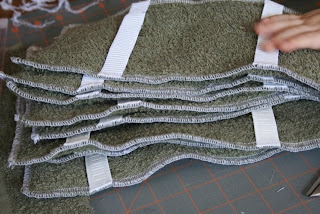 Within minutes I had a stack of eight. 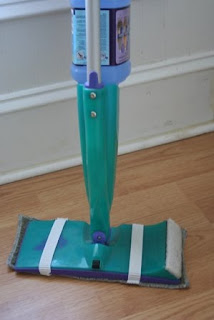 Slide them on and mop away. 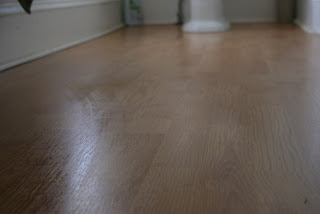 You will have a clean floor and have saved one more thing from ending up in the landfill.

Now, if I can just do something about the cleaning liquid ... Something environmentally-friendly, economical, and won't cause further pain to my arthritic back.
crafting

April said…
oh my gosh, THANK YOU FOR THIS. I just bought a swiffer wet jet. I only have wood floors in the kitchen, but esp in the summer with the windows open and crazy wind, I needed something to do the floors everyday. As for the solution, I did find a video on YouTube where a guy boiled water, stuck the cap end of the container for the solution down into the water for about 10 sec. and it shrank the plastic enough that he could unscrew it and fill it with his own soultion. He used pinesol but I'm thinking vinegar and water maybe?
8:59 AM EDT

christy said…
i'm sure there are home made floor cleaning solutions you could make if you google it. we cut a hole in the top one time and refilled it with some other cleaner and just put tape over the hole. the rags are a great idea. do they stay in place well? i just switched to a microfiber dust mop with a washable cover and sometimes i wet it in the sink to mop the floor. works pretty well.
9:08 AM EDT

Amy Siegert said…
Hooray for you, Lera! Way to save the environment and money at the same time!!
9:26 AM EDT

MoonDog said…
I read somewhere once about someone cut a hole in the bottom of the bottle and then pour their own homemade cleaner in there.
9:32 AM EDT

lisa said…
Oo oo, I got this! Ok, you take your empty Swiffer bottle and hold the lid under hot water (or put it upside down in hot water in a coffee cup). After the plastic has warmed up you can unscrew it. Then fill it with a mix of vinegar and water, fifty - fifty!!! You will probably have to do the hot water thing each time you have to open it but it works. I have a bottle like this and a regular bottle in my laundry closet. To keep them separate I just peeled the label off so they look different.
5:39 PM EDT

Brenda said…
I love these. I've made something similar for another mop I have.
7:09 PM EDT

Marty said…
Too funny-here is my tutorial:

I totally reuse old wash cloths on my regular Swiffer rather than buying boxes of the refills.

I guess they never thought we'd figure out that the grabbers on top of the Swiffer head will grab things other than Swiffer cloths?
3:08 PM EDT

Diane said…
Way to go on the reusable cloths! I may need a swiffer someday... and when I do, I will remember this post!
9:49 PM EDT

LunaMoonbeam said…
I don't have a swiffer wetJet, but I DO have a normal swiffer. Thank you!

amy smart said…
I use diluted vinegar too.(I don't have a swiffer -I just use a regular spray bottle and a microfiber mop.) I put the vinegar solution in a spray bottle and spray as I go. Works awesome. But my kids hate the smell.
11:19 PM EDT

Brenda said…
For some reason I couldn't leave a message on the lip color. Anyway, I use the Champagne color and love it. I will try the peony.
4:44 PM EDT

Preppy Pink Crocodile said…
I have been meaning to do this for a year- thanks for the reminder. Years ago, before I had a wet jet and just had the regular swiffer, I used to just pop on a baby wipe (I use them to remove make up at night so I always have them on hand even though I don't have kids) on it. Works just as well and was mere pennies!
3:06 AM EDT

John and Jessica Gladney said…
Is there a way to do this if I don't have a serger?
12:41 PM EDT

Anonymous said…
Yea zig zag stitch around it will keep it from coming apart
1:33 AM EDT