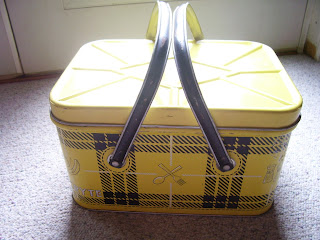 On Friday I went to a flea market. Now I can stop boo-hooing that there aren't any around here. I haven't been to a flea market in years. Years. There was an annual local antique tractor show with a flea market. I have missed it for the past few years because of soccer games. This year I learned that they are open on Fridays, too, which I never knew before.

My favorite find of the day was this tin picnic basket. I have wanted one for years and I found a stall that had two. The other was the red & green plaid, which I had seen before. I had never seen this yellow one, so I was drawn to it immediately. So far I have used it twice. I filled it with snacks for soccer on Saturday and filled it with snacks yesterday when the boys had off of school and we took a little trip. 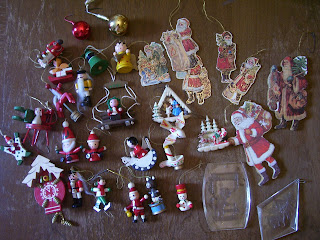 At the same stall as the picnic tin, I found a box of vintage Christmas ornaments. 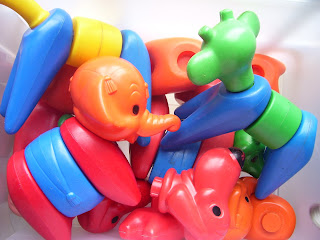 I was happy to find some Tupper Toys (made by Tupperware). My grandmother had a set that we played with as children. I had bought an incomplete set many years ago (when Carter was a baby), but I found a complete set on Friday for $2. 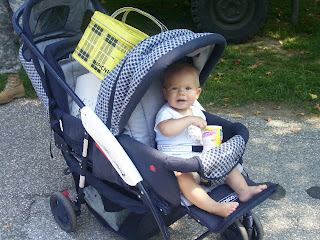 This poor baby. Let me tell you. He has it rough.

Yesterday we were leaving the house. I was rounding up the children, refereeing some arguments, and it was hectic. It was hot outside so I decided to take my stuff (picnic tin and tote) to the car first and start the car so it could cool off. The older children followed me and got in the car. I usually put the baby in the car first (and not the "stuff"). I ran back up to the front door and as I was pulling it closed to lock it, I heard Sawyer talking. He was sitting in his car seat in the dining room. I almost left him home alone. If he had not been talking when I reached for the door, I think I would have left him there.

Anonymous said…
LOL at Mother of the Year award! Pam and I tease each other about that all the time.
I remember those Tupper toys! That brings back memories...
10:08 AM EDT

Karyn said…
Poor neglected Sawyer. He's going to need therapy when he grows up now and have abandoment issues I'm sure :) he he he

Anonymous said…
the way things went at our house this morning, I would have liked to have left one at home. Tee Hee!
Great score - and useful as well - you can't beat that.
10:43 AM EDT

Anonymous said…
oh no! i hate those Bad Mom Moments. but we all have them. love the basket! that is seriously cute, and i'm glad you're using it and not just looking at it.
12:56 PM EDT

nikko said…
I hate those bad mommy moments, too. Thank goodness everything turned out alright.

Emily said…
LOL at your mom moment. I think that any mom that hasn't had a moment (or few) like that isn't being honest. :-) I only have 3 to keep up with but there are days that I am so frazzled I need to make them count off so I can be sure I have them all (and no extras! lol)
1:18 PM EDT

Me and Him said…
I'm sorry I had to laugh. At least he was happy chatting away to himself.

I had those same tupper toys when I was little. And I still have some of those christmas decorations.

Brandy said…
LOL, sounds like my house! I loooove that picnic basket. And my granny had a set of those toys too! I can remember playing with them. She kept them in a box in her spare bedroom closet. I no clue they were made by Tupperware. You know, she probably still has them!
9:48 AM EDT

Amanda Jean said…
don't be too hard on yourself. being a mom is hard work!

Chara Michele said…
I agree with Amandajean, don't be hard on yourself... I am pretty sure most parents have done that at least once (or at least parents who have more than 1 or 2 kids:)

I had some of those tupper toys as a kid! I totally forgot about those till I saw that picture!

Heide said…
Go easy on yourself, mommy! Considering you have about 86 kids, things like that are bound to happen! :)
7:37 PM EDT

Holly said…
I had completely forgotten about Tupper Toys. Wow. Your picture brought a flood of memories! What a great find. Now I'm going to be on the lookout for them for my own little one.
8:07 PM EDT