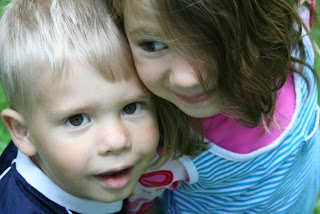 We've had a few busy weeks. Taylor and Carter went to Boy Scout camp one week. The following week Jackson attended Cub Scout Day Camp all week and Taylor and Carter volunteered all week. The next week all four big boys went to summer camp. All four boys. (Thanks to Operation Purple.) Then we went on vacation. It's been wild and crazy this summer, but so, so much fun. 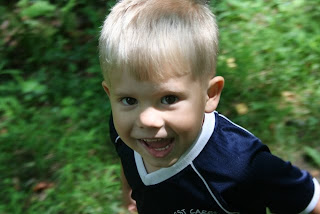 In the past week we've hiked several times, including a mountainous five-mile hike. Sawyer never complained until the last half-mile or so. His poor little legs and feet were tired, but he was a trooper. We geocached, as we hiked, in the mountains and by the lake. 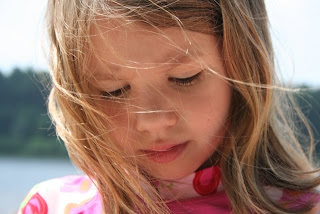 The kids swam and played in the lake. 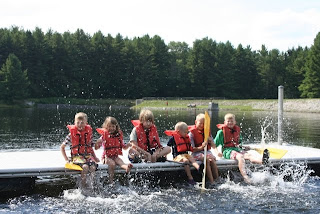 We took the troop canoeing twice. 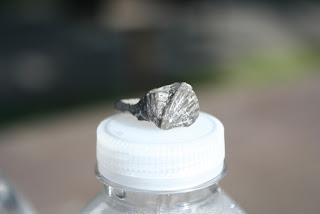 Spenser found a seashell fossil in the lake. We kept telling her she wouldn't find any shells and she proudly found this "shell." After a quick inspection, I realized it was a fossil and she felt like a rock star and impressed her brothers. 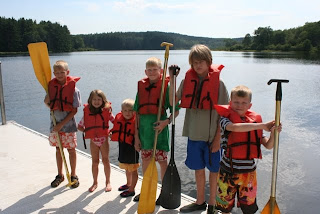 We set out to take the children's family photo. This was one of the better ones. (Don't get me started on family photos.) 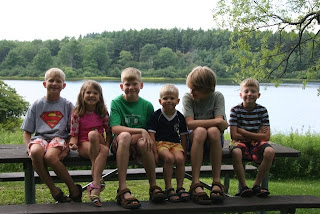 Even though Taylor wouldn't look at the camera (he was fighting his urge to smile), I still like this shot at one of the lakes. 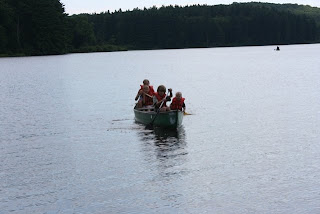 And canoeing. This was the first time I have ever canoed. Ever. Like ever, ever. I'm usually on the sidelines getting children into life preservers and signalling Joe to return for his next group. We rented two canoes one afternoon and we went in the lake and around a small island. (I made Taylor go with me since he just earned his Rowing Merit Badge this summer.) 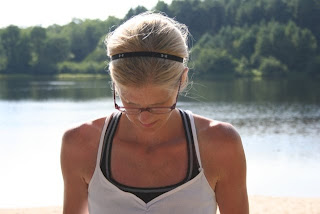 Joe is continually taking photos of me. I am continually avoiding the camera. This was one of the only non-hideous ones of me. And I think it's because I'm not looking at the camera. 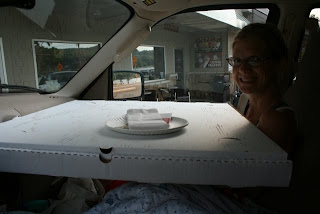 And on our last night we ordered what seemed like the world's largest pizza. I'm sure there are larger ones somewhere, but this was the largest one we've ever seen and eaten. It was a whopping 26" in diameter. It barely fit in the car between me and the dashboard. It was actually wedged in there. My hands only supported the bottom of the box. We have since decided that this will be our newest vacation tradition.

We continued other vacation traditions, like hot-tubbing and homemade ice cream every night. We enjoyed strawberry, vanilla, strawberry-banana, chocolate-fudge, cheesecake (my favorite), and chocolate ice cream.

Joe and I were able to go on several runs while we were away. We ran through the mountains and by the lake and the view was breath-taking. Literally. This was our first vacation where I could run, as I had been recovering from knee issues the previous two years. (I'm currently coming off an extended leg injury that I've been dealing with for over three months.)

And Sawyer took his first ride on the Mountain Coaster. He loved every single second of it. He screamed, "Wheeeeee! I love this! Wheeeeee! I love this!" all the way down. And Jackson rode down all by himself this year for the first time. Mason was just a few weeks too young this year.
family family fun

Kris said…
What a summer! I love that you had such great family time together. I think any photo of you would be lovely! Don't be too hard on yourself, it's lovely that your husband wants to take photos of you too! The canoeing really sounds fantastic.
8:52 PM EDT

nikki said…
You have been busy! Haven't had a chance to talk to you. Love the new photo of the kids!
8:56 PM EDT

Brenda said…
Looks like a great trip. Those kids have changed so much from last years photo.
2:29 PM EDT

FinnyKnits said…
What a greatGREAT trip! I'm glad you got to go canoeing - such fun. And I'm glad you weren't beheaded by that monster pizza. I love your new tradition :)
12:07 PM EDT

Emily said…
What a wonderful post and how time flies! another change in family picture on your blog header!