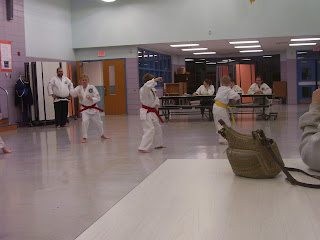 Last night Taylor (center, red belt) and Carter (yellow belt) had their karate exams. Taylor was promoted to green belt and Carter to red. Taylor was happy with his promotion until they announced that the girl to his left was promoted to purple. Taylor felt that was unfair. We tried to explain to Taylor that this girl had been a red belt longer than he had been (and maybe more prepared) and that her moves were a little stronger. He felt he did not do his best. (I think this girl likes Taylor and maybe vice versa.) And do you see the man sitting at the table (at the right) with the long hair? That's our mayor. 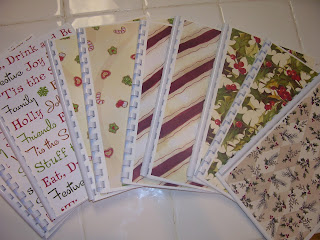 Above are the cookbooks I completed yesterday. Linda so thoughtfully gave me more suggestions for the covers. I had planned to use her quilted cards tutorial, but she suggested just using paper instead (quilted like Kayrn's cards or not quilted). In order to save time, I opted to just do a single paper on each over. Nothing fancy. I used permanent double-sided tape.
Last night I made a quick batch of soap after the kids went to bed. So I think I'm finished making soap for Christmas presents.
I'm hoping to start making Christmas candies today.
crafting karate

Anonymous said…
Congrats to your karate boys. What a wonderful accomplishment. Jackson did tae kwan do in Hawaii. Very stressful at test time, but great discipline for him.
Soap, done, good job.
The cookbooks are wonderful, what a thoughtful gift!
Get started on the sweets, you will be happy that you did. We (me) got our sweet bags done yesterday afternoon..... ooops, there was some left over, so we have some sweets to eat for us!!! Woohoo!!!!!
10:20 AM EST

laura capello said…
oh man, taylor is at the age that he's starting to like girls?

Anonymous said…
Somebody's been super-productive lately...I, on the other hand, have been spending way too much time on the couch, vegging out. Congrats to your boys for another belt promotion test.

You go make those sweets, and then take a long, well-deserved break from it all.
10:43 AM EST

Anonymous said…
I've not heard of kids skipping belts - that doesn't seem fair somehow. Of course, every school can set their own standard, I suppose. That's just weird, though. If she's that good, then shouldn't she get to take the test earlier than the next kid, and do her parents save $ not having a belt test? Seems like a weird business decision on the part of the Karate school Oh well.

I think the notebook covers look great. I'll bet the paper was a lot quicker option as well. I think double-sided tape is one of the greatest inventions ever. :o)
6:43 PM EST

Karyn said…
You must be so proud of your boys!

The cookbooks look fantastic, I'm sure that paper was wayyyyyyyyyyy faster and easier than fabric!
8:16 PM EST

Joanna said…
Love the way your cookbooks turned out. And where do you get your energy? If I made soap last night, I think I'd take the next week off, and maybe the week after that too! :)
11:34 PM EST

Anonymous said…
i was thinking about making soap this year (changed my mind) - about how much does it cost to make it? (i'll file that info away for next year!:)
8:54 AM EST