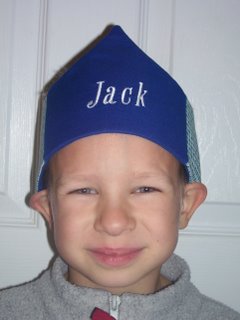 Six years ago today we welcomed Jackson into our family. At about 9:00 p.m., I was getting ready to go to bed when my water unexpectedly broke (without being in labor). My doctor (via phone) tried to tell me it was just urine, but when it happened again a few minutes later, I knew! (I knew before, too, but I didn't want to contradict my doctor.)

Jack has been a blessing to our family. He is a sweet little man. He is very loving. He always hugs and kisses me (and Spenser and Sawyer). He is goofy as can be. He is smart. He is very agile. He is Jack. Just Jack.

Jack had a few rough months in the beginning. He was the younger brother of Carter -- terror of all terrors. When Jack was about three months old, Carter drew on his face with a ballpoint pen: 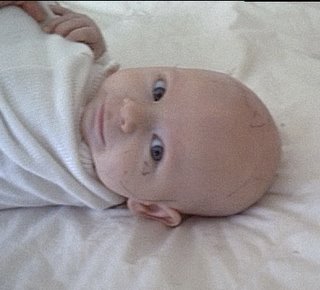 Look how close he got to his eye!!! (Sorry, that picture is so awful. It was taken with our first, ancient digital camera!)

A couple of weeks later, Carter stuck stickers all over Jack's head. (I can't get that picture to upload, but I'll still work on it.) And Carter tried to give him bubble gum around the same time. (I spied pink stains on Jack's shirt and when I got close enough, I smelled bubble gum on Jack's breath! At three months old!) Oh, and how about the time that I left Jack on the bed to empty the baby bathtub and Carter pulled Jack off the bed onto the floor?! (I think he was trying to climb up by pulling on the comforter. Jack was still on the comforter. The comforter just happened to be on the floor.)

Here are a couple of my favorite Jack pictures: 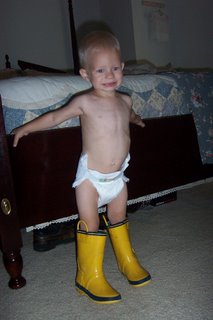 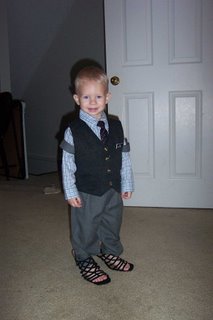 And Jack dressed up for church, but wearing my heels. What a guy!

(Blogger is not allowing me to add any more of my favorite pictures. Grrr!)

So, after seeing Spenser's crown, Jack requested his own (as did Mason and Carter). I spent yesterday afternoon trying to remember how I did it. This time I added a bit of elastic in the back so it will "grow" with him. I also spent an aggravating hour sewing patches onto three karate uniforms. That is something I do not enjoy. I told Joe that if I wind up missing, to check the boys uniforms for my DNA, as I was poked with the pins about 90 times and I'm sure my blood is on there somewhere. Now I have to sew cub scout patches onto shirts ...

Okay, Blogger! This picture only appeared after I published it ... This is for Capello. She had to be a wiseguy about not seeing the picture of Jack's Christmas ornament from yesterday! Here it is ... Are you happy now?? :-) 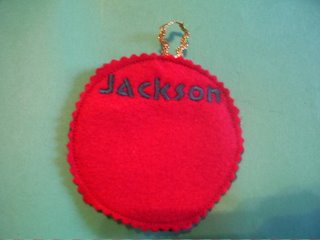 Anonymous said…
My J (jackson too- shhhhh.) will be 6 in January.

That little bald baby with the pen on his head- eeeeek! I could eat him up. Happy Birthday, Jack!
11:39 AM EST

Anonymous said…
Happy Birthday, Jack! He's just a little bit older than Aidin. It's a fun age, isn't it? I hope Spencer is being a little more gentle with Sawyer than Carter was with Jack!

And patches! Thankfully, the Daisy Girl Scout patches are IRON ON!
11:40 AM EST

Anonymous said…
Why do doctors not believe US - the women who are actually carrying the babies? I just don't get it sometimes!
5:17 PM EST