I Knit a Hat 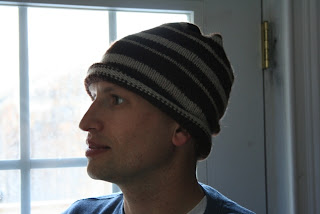 This hat (that I gave to Joe for Valentines Day after Valentines Day) started off being a cowl. As I was knitting, I kept thinking that it looked more like a hat than a cowl. When I came close to finishing the cowl, I tried it on my head. And it fit. As a hat. I knew this was my chance to try the hat pattern that I had picked out for my first hat. (There's even a Youtube video on how to make it!) Lucky for me (it was really just luck, not skill), that the cowl circumference was identical to the hat circumference. And (because apparently I can't count), I had cast on 96 stitches for the cowl instead of 95, so I had my multiple of eight staring right at me in the face. It was destiny, I tell ya. It was meant to be a hat all along. 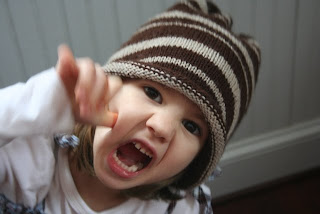 The hat ended up being a little long once I decreased enough to finish it. But, that's mostly because I was making a cowl and didn't want to frog this sucker any more than I already had up until that point.

I used dark brown and tan Patons Classic Wool. I was making random stripe widths, but once I established a little pattern, I decided to stick with it. I knit five rows dark, five rows light, nine rows dark, two rows light (repeat). I think I will have to use that stripe pattern again.

The leftover tan yarn has been used ... Tune in tomorrow to see what became of the tan.

Diane said…
Love that stripey pattern. I don't know anyone else who "accidentally" makes awesome hats. You rock!
8:17 PM EST

Amy Siegert said…
That is a totally GREAT hat!
8:39 AM EST