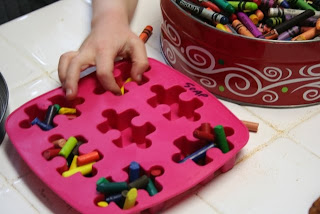 Years ago (I think Taylor was a toddler/preschooler and Carter was an infant) we made rainbow crayons using mini muffin tins and the oven. I remember, at that time, thinking the whole process (especially the cleaning process) was a huge pain in the butt and I swore I would never do it again. Well, I did it again. And I still regret that we did it again. 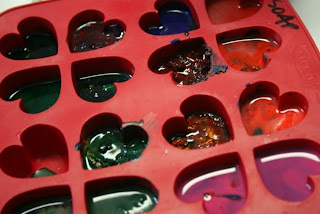 After Googling it a bit, we popped them in the microwave. It took much longer than anyone else claimed it would take. And there were still lots of bits that refused to melt. 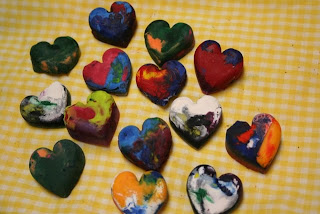 The result were some okay rainbow Valentines crayons. The kids were happy to draw with them and they work fine. 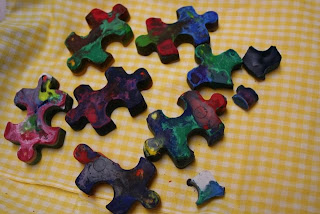 The attempted cleanup was a horrible mess. I had to use Goo-Gone and a toothbrush to remove all traces of stubborn, melted crayon bits. As I scrubbed, it sprayed all over me and the kitchen walls and cabinets.
So, if it's been ten years since the last time we did this, I figure I'm in the clear. In ten years Sawyer will be 13 and I won't be tempted into trying this again. Maybe by the time I have grandchildren I will have forgotten.

[For those of you who asked, I left a comment on my last post about glycerin soap.]
crafting family fun

Karyn said…
Those crayons look like fun, I'd like to try them, but I can only imagine the clean-up mess.

nikko said…
I felt the same way the last (and only) time we've done this. Some melt, some don't, it stinks up your kitchen and the clean up is muy yucky!
11:08 AM EST

spicyapplepie said…
they look lovely, shame about all the cleaning though!
4:57 PM EST

lisa said…
I did this and LOVED it. I used a double boiler and didn’t have any problems . . . except rust spots in my pan. I think next time I will use glass baby food jars. I’m surprised you didn’t like it.
5:28 PM EST

Diane said…
IF you are tempted to do this again, blog about your temptation first so we can remind you... DON'T DO IT! ;)
1:06 AM EST

Philigry said…
that looks like so much fun! my kids would love to color with those! and make them for that matter!
2:22 PM EST

FinnyKnits said…
Question for you on removing the crayon bits (and keep in mind that I've never made a crayon craft, so have no idea what I'm talking about)...what if you stuck the molds in the freezer and then, when the melty crayon was all frozen, twisted the mold and cracked it off?

Does that make sense?

I only say that because it's helped in the past with candle crafts.
4:08 PM EST