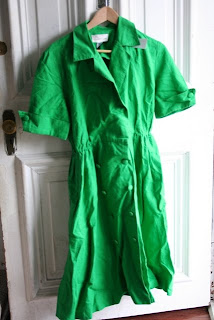 A few months ago I thrifted this green dress. While I didn't love the brightness of the green, I liked the style of the dress. It seemed very 50's to me.

I had some grand plans for this dress. I thought about swapping out the buttons and making a belt for it, as the original belt was missing (which was probably a blessing in disguise because the dress was green, all the buttons were green, and I assume the belt was very green).

Several long months later, the project is finished. Two failed belt-attempts later, I think I like it. 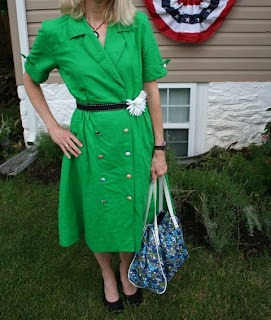 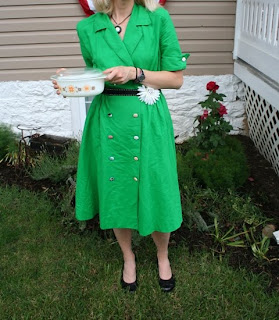 Perhaps I should be wearing pearls with the dress and delivering a casserole to a sick neighbor in a vintage Pyrex dish? 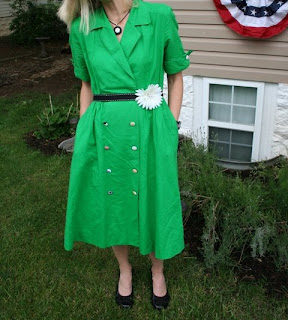 And, look! It has pockets!

I chose different scraps of fabric to cover each of the buttons. Some were old vintage scraps or vintage sheets. Others were fabrics I thought would stand out against that green. Oh, that green. 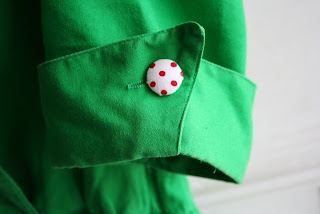 Even the sleeves got pretty new buttons. 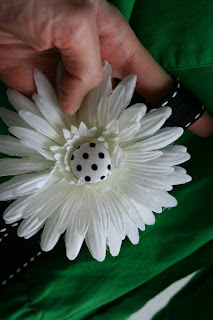 And the belt. The belt was made from some grosgrain ribbon scraps I had. Neither piece was long enough on its own, so I pieced them together and sewed a set of D-rings on one end. I sewed the flower together and made a coordinating covered button for the center. (I definitely wanted the belt to be wardrobe neutral. In fact, I think I wore it to church last week before I attached the flower.)

So, I must make a few confessions. First, after I bought the dress, I thought I had lost my mind. When I got the dress home, I realized that the green is really bright. I actually considered donating back to Purple Heart or bleaching the holy heck out of it. But it sat in my sewing pile for awhile. Then I finally decided to go for it, and covered the buttons, but never sewed them on. And it sat again. I had made two belts and didn't love them enough for the dress. Just within the past two weeks, I found inspiration for the belt (from a blog, I think) and attached the buttons that very day. I thought the dress was "dry clean only" so it sat for a few more days. When I looked at the tag, it was hand-washable. I decided to test fate and throw it in the wash on the delicate cycle and it survived.

Confession #2: The boys told me I looked like I belonged on the set of Elf at breakfast yesterday morning.

Another confession: I wore it to church yesterday. As I sat in church I started to think I must look ridiculous. I was brighter than noonday, for Pete's sake. During church (with full faith that I would survive the humiliation of wearing such a garment in public), I decided I would donate the dress to Purple Heart so I would never be tempted to wear it again. After Sacrament (our main church meeting), I had to make a few quick rounds around the church hallways to make sure all of our Primary (children's program) teachers were in their classes. I couldn't walk more than ten feet before I was complimented over and over again. By the time I had finished making my rounds, I decided that I love this dress and I will wear it every week. (Or not. 'Cause that would be overkill, wouldn't it?)

So I think I like it. At least enough to keep it for a month. Being that Purple Heart just made a pickup on Friday, the dress is safe for another month ...
crafting thrifting

Diane said…
What an excellent find! It looks great on you. Gotta love those pockets too. It's a keeper :)
7:22 PM EDT

hooli said…
It's great! You're such a thin little mother... maybe take it in a bit, to show off your cute figure.
You're clever. I would never have thought of making all the buttons different.
The best is great. Now all you need is one of those great tin flower brooches.
10:10 PM EDT

Brenda said…
Oh Lera. It is adorable. I really love it. It's about time you were sewing for yourself again.
10:29 PM EDT

Anonymous said…
The dress is fabulous! Of course you should keep it and wear it often. In other words I'm "green" with jealousy.
1:16 PM EDT

Preppy Pink Crocodile said…
I love love LOVE your kelly green dress! So fabulous!! The style, the color, the fit...darling!

Oh and I wash just about every single thing I own- dry clean only tag or not- on cold regular cycle. I hang dry most things but it all goes in the washer. I don't even have a front loader. My theory is that if I can spot clean something with a wet cloth and if it doesn't melt off me mid surprise rain storm, it can go in my washer with regular old Tide as long as I use cold/cold and hang dry. I've never once had an issue. Watch those be famous last words of course...
2:38 AM EDT

tarabu said…
seriously like the update on that dress!
11:09 AM EDT