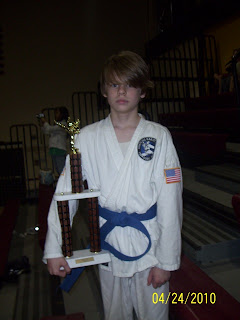 Taylor, my eldest, had to compete in a karate tournament (U.S. Eastern Regional Karate Championships) a few weeks ago. He is quickly approaching his next exam (for brown belt) and needed one more tournament under his belt. No pun intended. 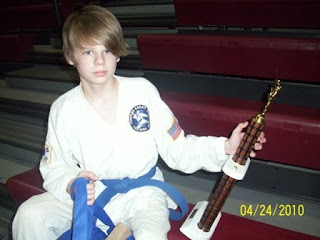 We were completely thrilled when he placed third in "one-step sparring ." 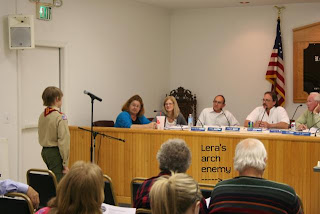 Just a few short days later, he attended a town council meeting in his boy scout uniform and presented his proposal for his Eagle scout project. And, because I have an "in" with the town council, his proposal was quickly accepted.
That's my boy! And he's growing up too quickly.

And, by the way, can you believe that tomorrow will be one year since the town council election? It seems like yesterday.
family

Bubba's an Eagle Scout and I can't tell you how often that comes in handy.

Also, why is your nemesis attending your meetings? Is he formally stalking you now?

Jane said…
He's really grown! He looks so much older than in your header! Eagle scout is such an honor and an opportunity. Way to go!
8:17 PM EDT

Furniture movers said…
You must be so proud of him. Go Tailor! Congratulations!
9:57 AM EDT

laeroport said…
Go Taylor! When did he adopt the Justin Beiber haircut? Ha!
And I love your caption on the city council photo. Oy.
1:42 PM EDT