The End of a Season 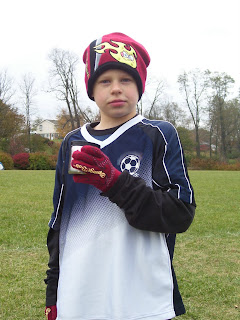 Soccer season for our family came to an end on Saturday. Mason, Jackson, and Carter had their soccer tournaments over the past three weeks. Saturday was Taylor's. It was cold. But I don't think it was as cold as last Saturday.

Taylor and I kept warm drinking a ton of hot chocolate. 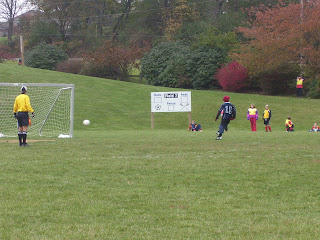 The tournaments are "double elimination" -- after two losses, your team is eliminated. Due to rain the day before, the tournament was delayed and the halves were shortened to 20 minutes each. The Iron Eagles (Taylor's team) lost the first game and then had a two-hour break. They were tied the second game and went into a "death match" (I think that's what they call it). Each team gets a "free" shot at the goal. After about eight or so turns each, the other team won. (It sounds horrible, but it was cold and we welcomed the opportunity to go home.)

During the many times I poured hot chocolate for Taylor, I was taking my gloves off quite a bit to loosen the lid to our thermos. Because it was cold, my fingers were shrinking, too. It wasn't until after I came home that I realized I had lost one of the rings off my finger. I was sad. The soccer field was too far to go back to and too crowded. I thought for sure if it was found, it wouldn't be turned in. Sunday after church we decided to drive up and see if we could find it because the soccer field is only 10 minutes from our church. Joe, Taylor, Carter, Jackson and I searched the grass for it while Mason, Spenser and Sawyer sat in the car. Just as I was about to give up, Joe found it in the grass! I was so happy. It made my day.

(Today Joe is home for Veteran's Day. It is also National Education Week and we are going to stop by the boys' school to observe.)
family

nikko said…
Saturday was the end of soccer for us, too.

Glad you found your ring! What a happy story.
9:03 AM EST

Katie Jean said…
It was sooo cold this weekend! I went to the Maryland football game on Sat and I thought my legs were going to fall off!

Karyn said…
You are so lucky to have found that ring Lera!

I'm at work right now and it's chilly here, a cup of hot chocolate sounds yummy right now!
9:44 AM EST

Anonymous said…
Happy Veteran's Day, Joe. Thanks for all you do.

And Lera, I'm so glad you found your ring. We had a similar ordeal over the weekend, fortunately with a happy ending.
12:34 PM EST

FinnyKnits said…
See, what WOULD we do without our soldiers?!

Little Munchkins said…
I would have been devastated if I lost my ring. Good on Joe for finding it!
8:56 PM EST

Amanda Jean said…
can't believe that Joe found your ring (no offense, Joe)...but that is amazing!
12:01 AM EST