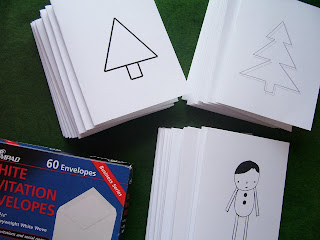 Last year Jackson loved to decorate these little guys. When I found some among Christmas crafting supplies, I showed them to Jack. We liked looking at his creations and he wanted to make more. We decided that it could be one of the crafts for his birthday party on Saturday.

Yesterday I got the idea to make them into cards that the children could decorate, instead of ornaments. After I made a stack of little people cards, I thought about Christmas tree cards. Then I had to make some of those, too. And, before I knew it, it was midnight. As I was packing it up for the night, I thought about stockings. That would be cute, too, but I think I'll just have to stop here. Maybe next year. Or the next birthday party ... in two weeks.

The cards were printed on cardstock (two to a page), cut in half and then folded. The "invitation" envelopes are the perfect size for these cards. And they are readily available in the stationery aisle of Walmart. Now I just to buy some Christmasy buttons and a little more rickrack and ribbon and lots of glue and we'll be all set for the crafting portion of his party.

I finished 18 stockings. Two didn't turn out. I tried a different decorative stitch on one but the two layers of felt didn't feed smoothly through my machine (I probably should have used my walking foot). The other was when my machine started having issues. Either way, 18 is plenty.

Sonja said…
That is such a great idea! Happy Birthday (Party)!
9:45 AM EST

Karyn said…
Oh my goodness, they are so cute! They are going to be a huge hit at the party!

Sarah and Jack said…
Ohh, I haven't posted it yet but have you seen the new ornament at Mushroom Meadows? She made it when I asked for something Jack could decorate this year, and it is every bit as cute as the Small Object one from last year.
9:58 AM EST

Anonymous said…
How many kids are COMING to that party? Yikes!
12:13 PM EST

Brandy said…
I am so impressed by what you get done in a day! Hope the party is a success!
8:26 PM EST

Heidijayhawk said…
what an awesome idea! and the stocking are super sweet!
10:29 PM EST

Little Munchkins said…
What a great idea! I love that Kidley site you posted, such fantastic ideas there.
8:04 AM EST