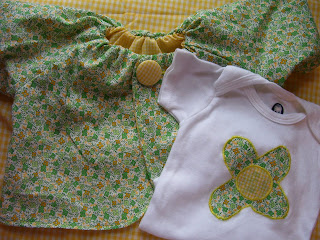 I think just about everyone I know is having a baby. Last week I received an invitation to a baby shower for the end of the month. I had already planned on making something for the mother-to-be because she is a friend of mine. She had told me that she really didn't like pink for a girl and that she was painting the nursery green. I have been searching for a nice green fabric, when I realized I had this repro print in my stash. I paired it with some tiny yellow gingham and loved the combination.

Of course it's a baby kimono and a onesie. What else would I make? I'm thinking she'll also get a diaper/wipe case, just like last week.

And, just for the record, when I found out that Spenser was a girl after four boys, I welcomed pink. I wanted the world to know that I finally had a girl. She loves pink now, which only means that she'll be dressed all in black one day. Just like her mama used to.
crafting

Karyn said…
Very cute Lera! I love the green for a little girl. I think when I was little pink was my colour, I'll have to check with DianNe.
9:16 AM EST

Anonymous said…
I hope you're still blogging when Spenser hits her all black stage.

Anonymous said…
very cute! i love pink, but when i had my daughter i loved dressing her in blue and purple. the best. especially as every gift we received for her was pink. after our ultrasound we stopped by old navy and i picked out a sweet blue dress.
9:58 AM EST

Anonymous said…
Ha! OR maybe she will like PINK and BLACK, one of my favorite color combinations.
Very Cute Baby Set, very cute.
1:31 PM EST

laura capello said…
well, i'm not having a baby.

Amanda Jean said…
cute! I like the green and yellow for a girl. because as much as i love pink, it's nice to have a few color options for girl. :)
10:53 PM EST

Me and Him said…
My friends baby (a girl) is due in the next couple of weeks, and I've made her gift in pink and green. Love that combo.
1:34 AM EST

christy said…
i hated pink when i had lidia. had i known she would be my only daughter i may have felt differently. of course i still like red more. i dressed her in red a lot. so who's having babies? anyone i don't know about yet?
2:32 AM EST

Anonymous said…
cute set, lera. you make such cute little baby stuff. my daughter is all pink, too. i didn't know that meant all black later. my poor husband won't be able to take it.
3:21 PM EST

Chara Michele said…
I like the green for a little girl:) I'm not a big pink fan... I think it has to do with the pink rose wallpaper that was in my bedroom when I was little:)
10:43 PM EST

Jodie | Velour said…
Hi! I just found your blog and I'm lovin' it. :) I would love, love, love it if you'd post a tutorial on how you make those baby kimono's. I am just smitten with them! I think I've seen all of the ones you've posted and they're the cutest things ever! Is a tutorial completely out of the question?
BTW, I love the green/yellow floral/gingham combo. I think it's darling for a little girl!
8:00 AM EST