December 29, 2008
We had a wonderful Christmas, despite Joe having to work on Christmas Eve and not getting home until 4:30-ish. And despite two children's eye injuries (one serious black eye given to an older brother by Sawyer of all people). And despite the fact that I've been sick for over a week now.

I started coughing a week ago Saturday and it continued until the nasal/sore throat/pounding head came a few days later. On Christmas Eve morning Joe served me a cocktail of Sudafed and Motrin before I got out of bed. I can't say it helped a whole lot, but it didn't hurt. At one point during the holidays, I lost most of my voice. Only syllables would come out. Much to my children's dismay, my voice has mostly returned with only some syllables missing. 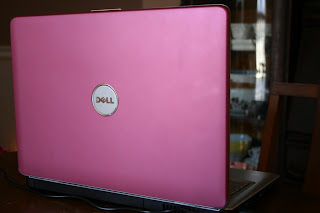 Two of my best gifts were a pink laptop from Joe. "My" laptop died in October and there has been a computer shortage in our house with the children.

I'd like to say I was completely surprised, but I wasn't. It's kind of like Autum's story. Joe ordered the laptop from Dell, and Dell called here on Monday, Dec. 22nd. When I told them Joe was at work, they proceeded to tell me they were calling to "extend the warranty on the new laptop." What idiots. I mean, can't you call on December 26th?!? I didn't tell Joe that they had told me. (I mean, my name was not on the account, so why would they talk to anyone other than Joe is beyond my comprehension. Especially three days before Christmas).

Oh, and they did call again on the 26th. Or was it the 27th? I don't remember. All of my days have blended and blurred into one.

And my other prized possession is this Pink Daisy Pyrex casserole dish from a very, VERY good friend of mine. This is my most favorite Pyrex patterns of all time. And I finally own a piece.

* * * *
And today my second son, Carter (the boy with his own style), has turned ten. He is a decade. It seems like just yesterday he was born. He is charismatic. Friendly. Stylish in his own way. Sensitive. Thoughtful. Creative. Funny. And devilish. Don't let his smile fool you.

He's the boy that (when he was 3 or 4 years old) woke up in the middle of the night, turned on all the Christmas lights and the TV, and chowed down on some Christmas cookies.

He's the boy that chewed a piece of beef jerky, didn't swallow it, fell asleep in the car (for a two-hour car ride), woke up with a wad of chewed jerky in his mouth, and still didn't swallow it. It wasn't until I noticed dried jerky (I didn't know what it was at first) on his chin that I realized he had a mouth full of rancid meat. It was the foulest thing you could have ever smelled. And I'm not just saying that because I was pregnant with morning sickness at the time. There was rotten meat in his mouth.

For today, I'll forget about the feces he spread around the crib. Or played with in the sun room. I'll forget how he pulled a newborn Jackson off the bed. And how he drew on Jackson's face when he was a wee infant. And tried to feed Jackson bubble gum, when he was only three months old. Or all the stickers he placed on Jackson's face. I'll forget the time he ran through a busy parking lot and my heart sunk as I tried to chase him at full speed, with Taylor at my side and infant Jack in the car seat, weaving through all the parked cars. Today, I'll just be happy that he survived his tenth birthday.

Happy birthday, Carter. Please be safe. Stop being such a daredevil. Please?

We are having a birthday party for him today from 2-4 p.m. Please pray for me. Joe is working and I'm flying solo today (and still not feeling the greatest, although I'm sure I'm not contagious). There are three boys coming and my six.

Anonymous said…
Happy Birthday Carter! glad you love youf gift! that makes me very happy! only the best for my friend.
1:46 PM EST

Anonymous said…
I wish you all the best while I'm at work. I wish I had known that I could have gotten you some pink pyrex and saved a lot of money......

Thanks for bringing Carter innto our world, he is a blessing.

Jessica said…
So jealous of your pink laptop! We are shopping for a new camera nad Jason won't let me get a pink one :(
Your Carter sounds an awful lot like my Carter ~ and he's only 3 1/2. Are you telling me these are all of the things I have to look forward to??
Happy Birthday Carter!!! (and I hope Mom feels better soon!)
2:05 PM EST

Diane said…
It's unbelievable that the computer company would call BEFORE Christmas! But, you got a nice one - and pink too!

Best wishes for you and your son today. May he have a very Happy Birthday, and may his mother get well soon.
2:21 PM EST

misschris said…
Oh, your dear thing! I'm so sorry you have felt to terrible!

That laptop is adorable and I love your dish. I picked up one in that pink daisy chain pattern not too long ago and thought of you. I was sure you already had some! Isn't it the cutest? Mine is long and shallow; I think yours is a much better size. I about passed out when I found it with a lid for $3. :)

Anonymous said…
Obviously, the people at Dell don't have relatives to give gifts to.
I'm glad you are on the mend. I've been fighting something for a few days. I will NOT be sick! I will NOT be sick! (Pass the sudafed.)
And you just made me laugh so hard I was crying - and my co-worker came from the next office to see if I was okay.
I hope you survived the birthday party. We had Eliot's yesterday - 6 five year olds at an indoor pool. Oh, lord. Never again!
Happy Birthday, Carter. Be good to your mama, okay?
5:26 PM EST

Amanda Jean said…
carter sounds like a handful. i hope his birthday was great!

that pink pyrex is fantabulous. what a GREAT friend.
7:16 PM EST

Autum said…
Boo to the Dell person. At least my UPS man let the cat out of the bag by going out of his way to be thoughtful. What a great gift though!
Happy Birthday to your little daredevil!
11:23 PM EST

Kris said…
Wow! There's one in every family, isn't there? Some kids are just hard work. So glad the party went so well. Love your laptop!
11:19 AM EST

Anonymous said…
love your pink gifts!
great stories to share with carter and his future girlfriends when he gets older :)
2:19 AM EST