The Boy Who Almost Smiled 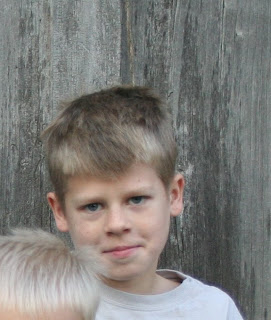 There's a certain boy in my house that turned 12 on Saturday. He is the boy that doesn't want to have fun or smile. Well, I think he wants to have fun with his friends, but never admit it to his parents. 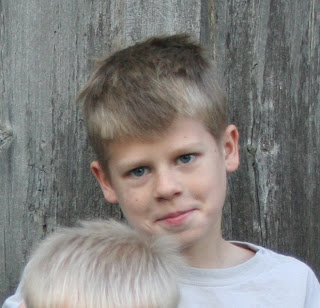 We almost captured a smile, but it never happened. He fought it with every energy and strength he could muster.

For his birthday we gave him a BB gun. He was disappointed. He didn't want one. He wouldn't tell us what he wanted for his birthday or what he wants for Christmas, so we mistakenly assumed a 12 -year-old boy might want a BB gun. I know a 10-year-old and an 8-year-old and a 6-year-old that think it's the coolest gift in the world. But not the 12-year-old. (Boy is he going to be disappointed for Christmas ...)

On Sunday he was ordained a deacon in our church. It's a big thing for the 12-year-old young men. He is officially not a kid and doesn't attend the children's Primary anymore. He will now have responsibilities on a weekly and monthly basis at church. And we are thrilled for him. He is happy, too.

Then on Sunday afternoon we had our annual Christmas party. Santa comes and delivers gifts to all the good boys and girls. After Taylor's disappointment on Saturday, we were afraid to give him the gift we bought for this party, so I wrapped up a giant bag of beef jerky for him. And, guess what! He loved it. There was a partial smile. (I think he's going to be getting a lot of beef jerky for Christmas.) 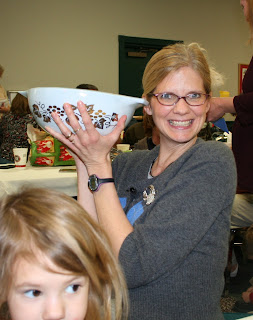 And the children weren't the only "good" ones. Apparently yours truly was a good girl, too, this year. Santa brought her a vintage Pyrex bowl. (He knows me so well.) It's the matching chip bowl to my dip bowl. You know, the one with the blue inside! Sweet! (My sister snuck the gift into one of Santa's bags.) Thanks, Kate. I was very pleasantly surprised.
family

misschris said…
What a handsome almost-smiler. And beef jerky lover!!! That just about takes the cake. I'm actually thinking about wrapping up some bubble wrap for Fidget this year because she loves it so much. LOL

Serious bowl envy over here, girl. That is a beaut. You have been very very good! xo
3:57 PM EST

nikko said…
My doesn't-want-his-picture-taken-anymore eight year old actually posed for a picture with a smile on his face on Saturday. I about fell over.

Jessica said…
Happy Birthday Taylor! My son's preschool teacher told me that the reason teenagers sleep all of the time is because otherwise we'd want to kill them. He's attitude about having fun made me think of that little comment :)
7:38 PM EST

Me and Him said…
Happy Birthday Taylor. Just think this time next year he'll be a teenager!

My 35 year old hubby would have loved a BB gun for his birthday. Why did I not think of that?
9:47 PM EST

Anonymous said…
ha! silly boy. what DO you get a 12 year old? yikes. reminds me of my brother - my parents have been known to get him cases of assorted root beers for Christmas
9:59 PM EST

Jane said…
I'm pretty sure some other 12 year old boy friend will like that BB gun and instantly elevate it to a cool gift. My brother likes weird gifts. We have gotten him Chia Pets, a Stretch Armstrong doll -very fun, jars of olives.
10:52 PM EST

Anonymous said…
He's so cute. Don't tell him that though. ;)

I'm giggling because it's all very preteen. I'll let you know in about 4 years if it's still funny.
11:50 PM EST

Amanda Jean said…
the title of your post just cracks me up!!!

and how cute are you, so excited for your pyrex. (and you should be!) good job at being good this year, LOL.
12:27 PM EST

Anonymous said…
Isn't she pretty. You won't find many pictures of her on the blog, so get a good look. DH.
1:09 PM EST

Kris said…
Isn't your husband sweet! I loved reading his comment. Happy Birthday Taylor! So cool to be 12 and be a deacon. I have had two boys do that and they loved it!
3:13 PM EST

Katie said…
Sorry to comment late...that is a very good picture of you. And you're welcome again for the bowl. It belongs with you!!! Love, Katie
9:38 PM EST