A New Jumper (Or a US Dress) 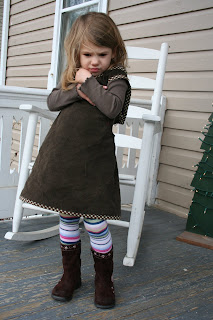 Last year I won the most fabulous ruffly rickrack and matching bias tape. I knew exactly what I wanted to make, I just didn't get around to making it. On Saturday night, I had some dark brown corduroy leftover from some Christmas gifts and decided I'd rather sew it than put it away. 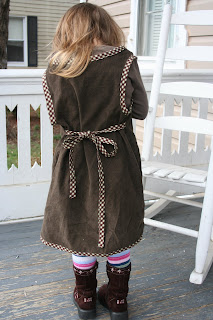 I traced an existing jumper, size 5, that belonged to my niece, Alana. (My sisters found it when they were cleaning out Krissy's apartment. Since Alana was only five when her mother died, it was probably a dress that Krissy had bought for her. Spenser wears it now, but I will keep it for Alana for when she is older.)

I used the bias tape for the neck opening, arm holes, ties, and hem. It was a quick sew. Spenser loves the jumper. But, when asked if she wanted me to make more, she replied a nonchalant, "no." Well, she needs more dresses like I need more fabric ... (Just don't ask Joe his opinion on that statement.) 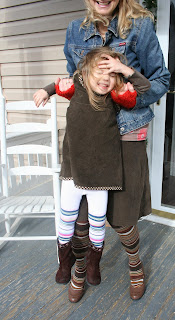 My uncooperative little model, once again.

This morning I took my boys to the dentist for checkups and cleanings. We go every year the week between Christmas and New Year's (and also in the summer) so the boys don't miss any school. Apparently, word is getting around that this is the best time to go, because it was crowded. Carter has a cracked front tooth from roughing around with his brothers. It happened one or two weeks ago, but I never noticed the hairline fracture across the front of his adult tooth. The dentist x-rayed it and said it looked good. It has a 5% chance of decaying and/or breaking off. Nice. After that great news, I took the kids to the store to spend some of their birthday money.

Carter's birthday party went so smoothly yesterday. I attribute it to the fact that I said a prayer before it started. In fact, it was the best birthday party I threw in the month of December. (And we had three.)

Taylor went on a youth temple trip today for baptisms. It's his first time going, since turning twelve two weeks ago.
crafting family

nikko said…
What a gorgeous jumper! Sometimes there isn't anything better than brown corduroy.
2:23 PM EST

Jessica said…
What a beautiful jumper! But I have to ask ~ where did you get *your* striped tights? I've been looking for striped tights and I can't find them. Anywhere. Glad your dentist appts went ~almost~ ok! :)
3:01 PM EST

Anonymous said…
Sooo cute! I need to make one for my granddaughter. Your tooth incident reminds me of what happened to my 13 year old grandson. He was playing basketball with his brother and they both went for the ball at the same time. Chris' elbow made contact with Isaac's front tooth, breaking it below the gumline. This is going to take several months and lots of money to get him a crown that looks like the rest. It's kind of an experiment on the dentist's part that's going to be very complicated. They temporarily glued his broken tooth back just for show, but will have to do much more work. When I read that your son's tooth will be OK, I was really happy for you.
3:18 PM EST

Myrnie said…
Love your matching stripey tights! Hope your son had a wonderful experience at the temple.
7:18 PM EST

Erika said…
I love the Jumper and Spencer always looks very cute. How nice that the B-day party went well and congrats to Taylor for his first time doing baptisms
Have a happy 2009
7:43 PM EST

Kris said…
The whole "jumper" thing is so weird. To me a jumper is a sweater. And that gorgeous thing you made is a pinafore. Wow! You really know they're growing up when they do a temple trip!
11:12 AM EST

Anonymous said…
her hair is getting so long...looks lovely
2:14 AM EST

Karyn said…
What a perfect way to use that bias tape! The jumper is SO adorable!

I can never go this long without reading blogs again. I feel so bad!
6:38 AM EST