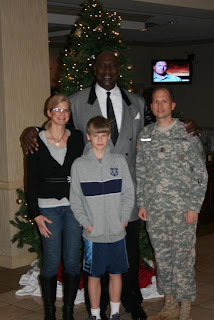 On Saturday night Taylor and I traveled to go meet up with Joe at his Annual Training Conference in Lancaster, PA. It was going to be a special night. Each year they have a boring training conference and a boring awards ceremony. I stopped attending these things because, well, they are boring. There I said it and I don't feel guilty about it. I went for the first few years of our married life, but then we had too many children and then the children started school and it just wasn't as easy to pack up for a three-day weekend as it was with preschoolers. (And, I really don't like to leave my children. I have only left them when I had a baby and I left some of them when Joe took me out for my birthday one year, but we had three kids, one of which was a newborn Sawyer, so that really doensn't count as being away.)

Anyway, my in-laws came and stayed with the younger five while Taylor and I went on a road trip. And, by the way, Taylor is not an enjoyable traveling companion. He wouldn't talk. And then he had the nerve to fall asleep in the car. I had to jam to Christmas music alone in the car.

We arrived before the ceremony and Joe introduced us to the guest of honor, retired MBA player, Darryl Dawkins. He was a very nice man. In fact, right after this picture, he hugged me and then kissed my neck. It was unexpected. 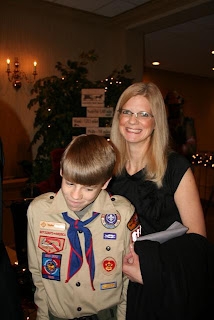 Then we dressed up and headed to the formal. Taylor wore his Boy Scout uniform. Sadly, he left his sash, neckerchief slide and something else at home, but he still looked dashing. And I almost made him smile. Even if I had to tickle him to force it upon his face. 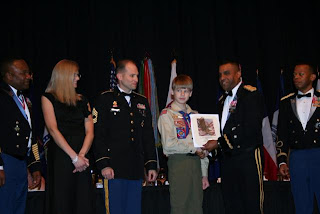 This ceremony was the most special one I've attended because Taylor was awarded the Chief of Staff Youth Appreciation Cerificate for completing the requirements for Eagle Scout. Brigadier General Bryan Roberts presented Taylor with the certificate. I could barely stop smiling I was so proud of Taylor (It just also happens to be Joe's last Annual Training Conference because he will retire next year.) 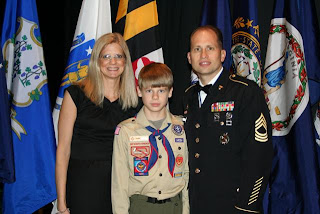 After the ceremony, we posed in front of the Maryland state flag.

While we were escorting Taylor to the stage, the emcee read the following (editing out details):
Taylor X, 14, of Troop X, in X MD, completed his board of review on 16 Dec 2010* and earned the Eagle Scout Rank. Taylor is the son of the Honorable Lera Fera, of the Town of X Maryland Town Council, and MSG Joseph Fera, Reserve Operations NCOIC of the X Recruiting Battalion.

The process to Eagle started at age 8 when he joined Cub Scouts and at age 10 earned the Arrow of Light, the highest award in Cub Scouts. In the last three years as a Boy Scout, he completed 43 merit badges including all four historical merit badges which were only available in 2010 for the 100th anniversary of scouting. He has personally served over 230 service hours to the community, served as a den chief at three Cub Scout day camps, attended the National Youth Leadership Training, served as a Patrol Leader in his troop and earned his Duty to God award.

His three years of Scouting experience culminated with a Eagle scout project that he had to design and carry out. Taylor and his 46 supporting volunteers completed the project over a six month time period. He planned and built bench seats and cut back vegetation along a quarter mile walking path, near an elderly low-income housing complex, in his home town that had exercise stations but did not have any seating. The lack of seating resulted in few elderly using the walking path and exercise stations. He also coordinated a cleanup and mulching of the playground at the adjacent community center that had become overgrown. Since his project completion date in October, the path and playground are safer and more frequently used because of his efforts.

Taylor is currently an 8th Grade honor student at X Middle School, an avid soccer player, and a blue belt in Tang Soo Do Karate taking 3rd place in fighting at the 2010 US Eastern Regional Karate Championship. He is a candidate for admission to the Johns Hopkins University center for Gifted Youth. He plans to continue in scouting and would like to earn the Varsity Denali award and the Venturing silver award. He also has a goal to play high school soccer and earn his black belt in karate.

See. Now you can see why I couldn't stop smiling! I'm such a proud mama. And last night he actually had his Eagle Board of Review.* And passed. It was scheduled for last week, but we had a scant one inch of snow (1/2 inch in other areas of the county according to the local newspaper) and it was postponed. The award he received Saturday night still went on as planned because he had already completed the requirements to receive it.
family

Kat said…
Bob said Taylor cracked a tiny tiny smile when they told him that he was an Eagle Scout last night. lol
9:45 AM EST

nikko said…
That is so cool. Some day I hope to have five of those. :o) I suppose you could have five, too!

lori / laeroport said…
and proud you should be. way to go, Taylor!

(and omg, Daryl Dawkins' hand on your shoulder is twice the size of your head!)

and to add to nikko - I hope you have five eagles and one girl scout gold awardee. :)
9:38 AM EST

Preppy Pink Crocodile said…
Congratulations to your family! You must be glowing with pride for your sweet young man!
1:12 PM EST

FinnyKnits said…
The pride! The pride! Makes me swell a little, too. I'll say it again, Eagle Scouts are the coolest.
7:53 PM EST