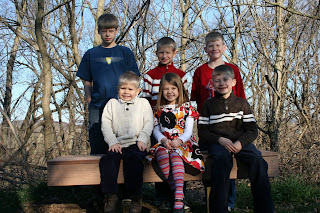 It was that time of year again. Remember that? If you don't, go back for a fun read and hurry back.

So, it's a time of year I don't particularly look forward to. I felt like we've exhausted backyard shots. (Although I did come up with a few new ideas. Maybe next year ...) Anyway, I started to think about 2010 and how one of the biggest accomplishments of the year was Taylor completing his Eagle Scout project. It seemed only fitting that we would include one of his benches in our family Christmas card shoot.

After about 200 shots, we picked this one. Sawyer looks goofy, but at the age of four, he is allowed to look goofy. He reminds me of Mason that one year. Oy.

We told the children to put on their sweaters because they were not going to wear their coats. Amazingly only the four younger ones listened. We didn't even realize it until we were getting out of the car and told the kids to leave their coats in the car. Taylor and Carter were cold, but that's a consequence of disobedience. 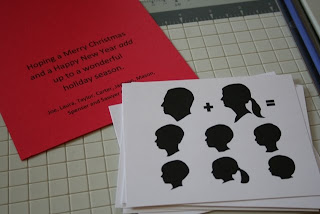 This year I thought it would be fun to do a different kind of Christmas card. We usually order the photo cards from Walmart or Target and I just wanted something new.

The idea to do silhouettes hit me during a Christmas concert. I thought about making notecards and it grew to be Christmas cards.

We used GIMP and found this tutorial on YouTube . It was perfect. It was clear to understand and easy to do. I let Joe do the actual tracing of the faces because his hand was more steady than mine. It took mere minutes for each one. (I bought some square 8x8" frames to print one of each of the children for our family room.) 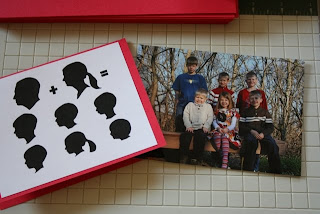 Joe said we should write something witty on the inside, so we wrote "Hoping a Merry Christmas and a Happy New Year add up to a wonderful holiday season." I usually sign our names or include a note to make it seem more personal, but after spending a few hours making the cards, I think it will be obvious that the card was handmade and "personal." And if we wanted to send them out this year, this is how it would be done. After all, I think I made 75-80 cards.

I printed the white tops on cardstock, four to a page and the actual cards were red cardstock, printed on the printer. I bought a pack of invitation envelopes from Office Depot. I did have to trim the edges of the picture to fit into the envelope.

christy said…
I made framed silhouette ornaments a couple of years ago and love them. Michaels had oval frame ornaments that worked perfectly. We took pictures in front of a white door or in front of a back lit window and used photoshop or gimp to get the pic to all black for us and the background all white. I hate my profile but oh well.
11:15 AM EST

Kat said…
Wow they are awesome! They truly look like all of you!
1:16 PM EST

Brenda said…
Those kids have grown so much since last year. I love the silhouettes. I could tell that was you.
1:23 PM EST

nikki said…
I love your card! We were all so impressed at how well the profiles came out. So detailed.
1:44 PM EST

FinnyKnits said…
Um, that is an AWESOME IDEA!

Truly brilliant. And it came out so well.

nikko said…
I think they turned out wonderful! What a unique and fun idea for a card. :)
2:05 AM EST