Since I am among friends, I thought I would share a few things with you. (After all, I've already told you how old I am, and I've told you how much I weighed!) 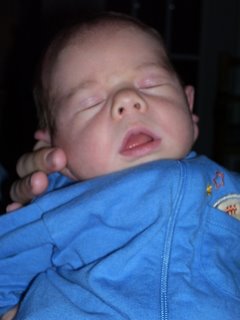 So I will spend my day running Mason to preschool. Running errands. Snuggling with babies. Smelling baby breath. Running Taylor to soccer. Running Taylor, Carter, and Jack to karate. And probably laundry.

(Sung in a Fera kind of way.)
And if you're old, I'm older. One of my favorite sayings is, "Age is a thing of mind over matter. If you don't mind, it doesn't matter."

beki said…
HAPPY BIRTHDAY Lera!!! I hope you have a wonderful day today.

christy said…
well you have one friend that actually calls you laura. happy birthday! and remember numbers don't matter at this point. it's how you look and feel. you're doing good.
10:38 AM EDT

laura capello said…
How is it possible that you use to spin alternative music but I had to introduce you to Hard-Fi?! :-)

Happy birthday Lera! I hope you have a fantabulous birthday!
12:01 PM EDT

African Kelli said…
What an excellent post! I love it Lera (which I have mispronounced in my head a thousand times.) Happy birthday to you my friend.
1:06 PM EDT

Anonymous said…
I'm the second one that calls you Laura. Is that wrong? lol
I learned a lot about you thanks for sharing.
I hope that your day is going well! Happy Birthday!!
2:38 PM EDT

Anonymous said…
Happy Birthday Lera! Great list. All that throw-up talk has me feeling a bit ill though. uh hum.
I'm glad to know the correct pronunciation of your name now....vedy interesting stuff here.
I hope your day is great. ;-)
3:10 PM EDT

christy said…
ok i'm stupid. i totally thought you were 5 years older than me but it's 6 and i would have known if i had paid attention to the beginning of this post.
4:04 PM EDT

Anonymous said…
Happy birthday! Hurrah for Lera - I am so pro breast milk and I'm so glad for all your kids and you that you could nurse them all so long!
5:24 PM EDT

Anonymous said…
i also call you Laura...well when i am not calling you Conaway!!
Hope you had a great day!! i am glad that i am your friend cuz you make me laugh everytime i talk to you!!
HAPPY HAPPY BIRTHDAY!! Cha Cha Cha
6:53 PM EDT

Jen said…
I am a day late, but I still want to wish you Happy Birthday!

Anonymous said…
Eeek, I, too, am a day late. But wishing you the best on your birthday! Hope you had a great one yesterday.

Oh yes. Wish I'd known about your dislike of spiders *before* I sent you the spider earrings. Hah, oh well, now I know!
1:03 PM EDT

Anonymous said…
I completely missed it. I hope you had a great birthday.