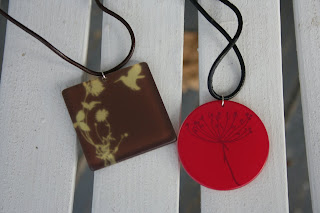 I've already confessed my love of pendants, so it should be of no surprise that two more have crept their way into my home.

I found these pendant discs at Michaels yesterday. I was armed with a 50% coupon and planned to buy Sawyer a Christmas present (a Thomas wooden train set). When I got to the train section, I had to distract Sawyer. I pointed to a jewelry-supply stand and asked "what's that?" as I tried to make my move to grab the train. His sweet reply was an "uh-a-uh?" Like, "I don't know." But then I realized I couldn't grab the train just yet, there was some cute stuff I needed to look at first. I meant to distract Sawyer, and distracted myself instead. Ha!

I have a very small amount of jewelry making supplies at home (I should use that term loosely) and whipped these up last night after the kids were in bed. Well, most of them were in bed. Taylor was still awake and had to help pick up all the little jumprings that fell to the floor because my back hurt too much to bend. 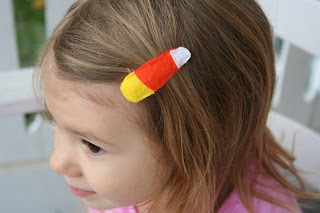 And then, I couldn't stop there. I've had this on my mind since I saw this cute barrette. This was not my idea. I stole it. 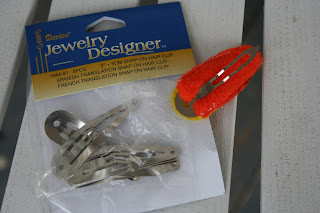 I used the basics from this tutorial and made my first attempts. I made a set of two in a matter of minutes. (Oh, I bought the barrette blanks at Jo-Ann in the jewelry aisle for like $1.) The best part? Spenser is really wearing one. The girl that hates hair accessories, especially barrettes, is wearing one. Like, right now!

LunaMoonbeam said…
So, so cute, Mama! (Oh, and I like your CC barette much better than the original. Yours is much more finished looking. :-))
8:53 AM EDT

Isaiah is OBSESSED with Thomas. Occasionally I can find some Thomas things at the thrift store, mostly books though. I did find Percy there and Isaiah went crazy.
10:31 AM EDT

Amanda Jean said…
I love your pendants! and hurray for Spenser wearing her cute hair clip...a candy corn hair clip, no less. so cute!!!
10:40 AM EDT

Unknown said…
LOVE the pendants and yippee for Spenser wearing that adorable hair clip!!!
11:07 AM EDT

Kris said…
Those hair clips must be good if Spencer is wearing them! Hope it lasts!
11:36 AM EDT

Anonymous said…
Oh, the art of distraction.
And those barettes are adorable. I've been thinking of making some too.
And I thought of you over the weekend when we went to the pet store and they had a CANDY CORN SNAKE. No lie. I wish I had had my camera. I may have to go back.
12:03 PM EDT

Anonymous said…
I wonder if my hair accessory child would like it too. She has a mess of curls always in her face so anything to see her face I will do!
12:20 PM EDT

misschris said…
Darling pendants, Lera. Michaels is a very dangerous place for me!

Liz said…
Very cool - the barrette is so cute. I have to make some of those. My daughter would look great with one of those in her hair.
10:25 PM EDT

Little Munchkins said…
Very nice! And of course it has to be candy corn colours :)
8:38 AM EDT

Vonlipi said…
I was at Michael's over the weekend and I bought the same pendant!( the dark pink one) It is adorable...Love the barette!
8:54 PM EDT

Diane said…
What a CRAFTY thief you are! Love the candy corn clip. And the pendants. It's tough to have limits at Michael's...thank goodness for the coupons!
5:39 PM EDT

Susie Chadwick said…
It wasn't my original idea either, but thanks for the link ;)
7:45 PM EDT