Happy Mail and a Tote 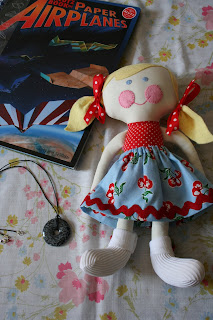 Yesterday I received the nicest package from Diane (who still remains blogless, but says she might start one next year). She is always so kind and generous. This is just one of many packages she has sent me. She asked if she could make Spenser a doll. And boy, did Diane show her dollmaking skills. Spenser adores this baby, to put it mildly. She gave her old, hand-me-down, store-bought baby (Baby Bea) to Sawyer. And she named this baby Diana. She has been everywhere with her so far. I draw the line though in the bathroom and at dinner (too many germs and/or messes). And I saw Diana in Spenser's arms this morning when she came down for breakfast.

The top of her dress is dotted swiss! It's really too cute. The skirt is the last of Diane's cherry fabric stash.

Diane not only sent a doll to Spenser, but an Elmo to Sawyer, who also seems to be attached to Sawyer's hip. It's not photographed because Sawyer was napping with Elmo.

And because Diane is so very thoughtful, she sent my older boys a paper airplane book. I think I should have studied air traffic control. The number of airplanes flying around the house last night and this morning has caused some minor traffic jams. The boys love the book. Carter said that everyone at school has the book. And Jackson said it was the best book ever. (Or maybe it was Mason who said that.) Either way, it's a big hit.

There was a pendant in the box for me. Not made by Diane, but by her husband, Jonathan, who is learning the art of jewelry making. It's lovely. (In fact, move over candy corn pendant, there's a new pendant in town!)

Thank you Diane and Jonathan. We love everything. 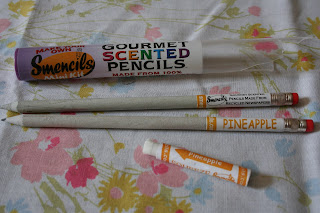 I also received a pineapple Smencils Mini Kit from Yvonne, who won it on a giveaway. The blog owner preferred to send it to someone in the states, so Yvonne forfeited her prize to me! Isn't that so darn sweet? Thank you, Yvonne.

(You gotta love a warning on the package that first states "use common sense." I don't think there is enough of that in the world.) 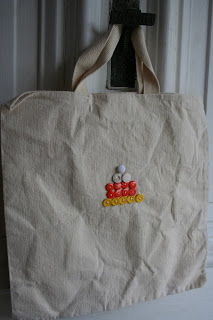 Last night as I listened to the VP debate, I decorated a pre-made canvas tote. Yes, how'd ya guess? Candy corn. If you squint, you might be able to see it better: 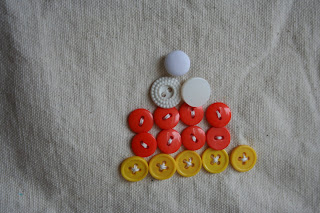 I'm happy to report that all of my projects as of late are made from my stash. It's comforting, yet scary. There's no end in sight.

Little Munchkins said…
You have been blessed by the happy mail fairy! Love that doll!

There is no stopping you on the candy corn project...I wonder what's next on your list?
9:46 AM EDT

Emily said…
That doll is so CUTE!! Is she willing to share her pattern? I would love to have it!
9:51 AM EDT

christy said…
i saw that doll pattern online somewhere and thought maybe i should give it a try as a christmas gift for my nieces.
10:19 AM EDT

Karyn said…
Look at that mail!!!! The doll it to-die-for!

Did you see the candy corn knit hats on Serious Eats today?

Amanda Jean said…
what fabulous mail!!! I love the doll. how sweet! cherry and polka dot prints belong together. I had to laugh that spenser gave her old doll to sawyer. that's how my kids share, too.

my oldest would LOVE that paper airplane book. in fact, I got hit by a paper airplane (that also had a paper clip attached to it for some reason) this afternoon when I was taking photos of my latest finished quilt. it's mine now.

and one more thing...never heard of smencils. but the use common sense warning made me laugh out loud. (as did your subsequent comment.)

Anonymous said…
Hia Lera- love your pendant idea and what a lovely lot of gifts! When I was very young I had a cloth doll which I loved more than the hard plastic dolls. Diana looks like a real treasure.
7:46 PM EDT

Bonus Mom said…
That doll is so cute! I love the cheery cherry fabric. The Candy corn craft fairy is on the loose ;)
7:55 PM EDT

jessica said…
You really did score with your mail. I love that doll too!
12:24 AM EDT

Kris said…
What a gorgeous doll! She is lovely. You guys did have great mail!
6:57 AM EDT

Amy Jo said…
I meant to comment to you the other day, but I forgot! I loved this bag so much that I borrowed your idea and made a similar one as well. I posted a picture on the flicker group. :-) You are such an inspiration!
10:24 PM EDT

DaiseyB said…
I just found your blog and the fact that you are Mormon I think makes it even better. I came across the post where you were showing all the neat stuff your internet friend " Diane " sent you. It had the little yellow haired doll in the picture. Could you contact here and see what pattern she used? My best friends little granddaughter would love one of these.
Thanks and I am adding you as one of my favoites to my blog,
panhandlesuesquiltingspot.blogsot.com.
12:52 PM EDT