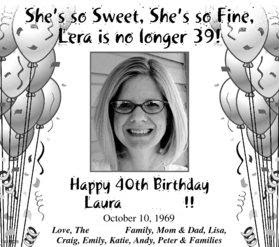 I cannot allow the day to end without posting.

Even though I've known it was going to happen for a few years, it's still something for which you cannot prepare.

It was a good day. Filled with a morning run with Joe (and unfortunately seeing lots of dead animal carcasses along the way), two winning soccer games, buffalo wings and cheesecake.

This morning I had the awful feeling I should check the local newspaper online. And, not to my surprise, there it was. An ad placed lovingly by my parents, brothers, and sisters. So, yes, my face blared through not only the online newspaper, but in black and white print. For all the world to see. Announcing my new age. It did make me smile. After I grimaced.

A couple of people recognized me from the newspaper today. Well, they already knew me, but they made sure I knew they saw it. One was our bishop (and his wife.) Another was the mother of one of Carter's friends that we saw in the store.

In keeping up with my birthday tradition, I will share a few things about myself. Hopefully they are not repeats from years past. Let's see ...

amy smart said…
Happy Birthday, Lera! You make 40 look good. I am slightly less scared of that impending date. :) Hope you had a good one!
4:22 PM EDT

Anonymous said…
i love to read your randomness. me:)
9:38 AM EDT

Glad you had a good run, buffalo wings (a fave of mine, too) and a great all around day.

Hope you get some big love with that newspaper announcement - too funny :)
3:43 PM EDT

Atleast your grandma didn't ask you if it felt wierd to call your uncle uncle bacause you are pretty much the same age. He is 18 years older than me.
5:46 PM EDT

Amanda Jean said…
i loved reading your list. :) i love buffalo wings, too. i wish i had a plate full right now. with blue (or is it bleu?) cheese.
4:07 PM EDT

Diane said…
This is SO belated, but HAPPY BIRTHDAY Lera!! Great list too. Hope that you have a wonderful 40th year!
12:24 PM EDT