Before, In Between and After 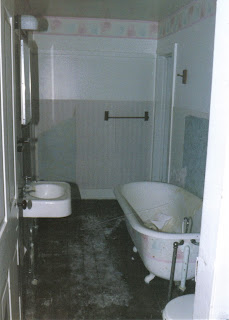 (notice the lovely, matching border around the tub and the walls?)

We gutted almost the entire house before we moved in, one year later. To this day, we are still trying to piece it back together. (But that also includes a 2-year move we had to Columbus, OH, during that time.)

Our house was built before there was indoor plumbing. I'm sure this old clawfoot tub (which has been moved to our downstairs bathroom) is pretty old, but not as old as our house and was added later. When we started to rip down walls, we realized that the bathroom wall (above) was moved to create a bathroom and enlarge the bedroom behind it (actually in front of it). We decided to put the wall back where it originated. We think they were both bedrooms originally. 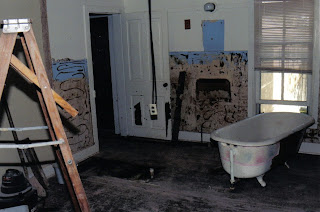 So, we worked on the bathroom and made it functional. Not pretty, but functional. We rushed to throw the old flooring down one New Year's Eve before a party so we would have another bathroom to use. It was supposed to be temporary.

I never liked it. In fact, I hated it. I hated to clean it because it never felt like it was finished. It always felt like a construction zone. The flooring was stapled down into place and curled around the walls, toilet, sink, tub, shower, etc. It was nearly impossible to clean around the base of the toilet, and with all these boys, that's a necessity.

The below picture was taken just a few weeks ago, on Taylor's birthday (12/13). This is the day we started working on it again. (It only took years of my nagging Joe about it.) 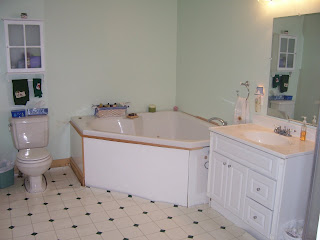 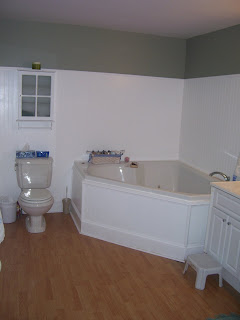 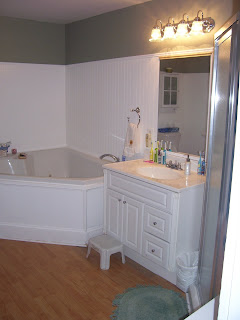 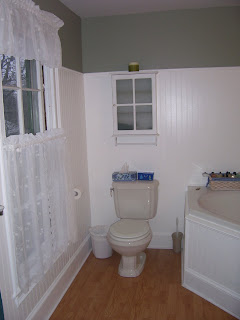 Paint touch-ups. Minor spackling. Some flooring around the sink still needs to be laid. The frame around the mirror needs to be completed and painted. We need new window treatments. New towels. A new liner for the basket on the tub.

I'm very happy with it. I feel I glide across the floor now, it's so smooth! And I actually want to clean it. Well, at least for now. While it's still new. I don't expect that feeling to stay for long.
corners

beki said…
My goodness, what progress y'all have made! Very impressive;-)
11:16 AM EST

laura capello said…
we moved into our house in may of 2000 too.

but you have way more progress. and more kids.

Jen said…
Your bathroom looks fantastic. I bet your kids have fun in that bathtub!
11:22 PM EST

Anonymous said…
Wow - the beadboard and darker paint make so much of a difference. It must feel great in there! Your Joe is a pretty talented guy.

I'm glad the alarm turned out to be nothing to be concerned about. I can't believe that a one in a million thing like that happened to you at 8am! It would have scared me as well.
8:29 PM EST

Anonymous said…
what a difference. that is a happy bathroom.
9:01 AM EST