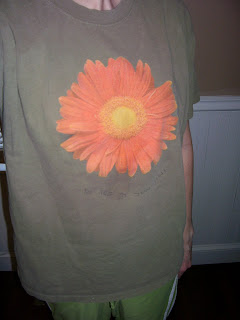 Many many years ago my mother gave me this shirt for my birthday. It was large. Shapeless. And it served its purpose. (You probably can't read it, but under the flower it says, "You are my sunshine.")

I think when I first saw the shirt, I thought it would make a neat pillow. I had forgotten about it for years. Before Christmas, I found it with some craft stuff and decided it was time. I re-washed it and sat it in a WIP pile until Friday afternoon.

That's when I decided to just do it. After years of thinking about it. After years of planning it in my mind. And, boy, I was nervous. I had never sewn a pillow with a zipper. And then my friend, Christy, talked me into using piping, too (which I had never used before). I only had one chance to do it right. One. Chance. Uno. 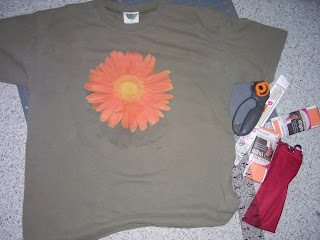 I was getting ready. And more nervous ... 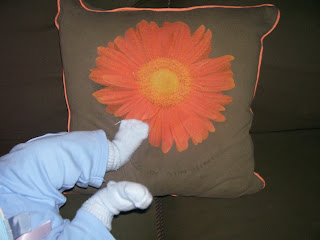 It didn't turn out perfectly. But I love it! And so do all five of the older children who fought over it Friday night.

It's not a snow day for my boys. School is only two hours late. But I'm fine with that.

christy said…
it's hard to sew piping onto knit b/c it stretches so darn much. cute. i love gerber daisies.
9:33 AM EST

Anonymous said…
i like to make envelope pillow covers - washable and no zipper!

(isn't it funny how the kids will totally be into something like a new pillow just because it's new?)
9:43 AM EST

laura capello said…
i really like the orange piping.

and kind of hate your doing piping and a zipper. overachiever.
9:59 AM EST

beki said…
You did a great job! The piping around the edge really makes it.
11:14 AM EST

Anonymous said…
That is a GREAT pillow. LOve it! And the piping! And a zipper. You rock, woman!
11:43 AM EST

Karyn said…
Wow!! Awesome!! What a great way to recycle old t-shirts! You did a great job, I'll have to think about how you did the piping AND the zipper!
12:53 PM EST

Randi said…
That pillow is so cute! I would never have thought of doing such a thing. Thanks for the idea!
3:31 PM EST

Anonymous said…
Piping?! Way to go, sis. I LOVE the way piping looks, but it's a pain.