Sewing and Thrifting and Smoke

January 03, 2007
Happy belated New Year! We had a nice, quiet New Year's this year. We had two little overnight guests and all the children had fun together.

And what better way to start off the new year than sewing and thrifting? Especially free thrifting. 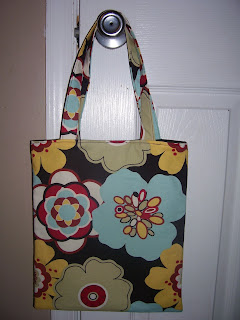 A tote for my sister's birthday (New Year's Day). Sewn from Alexander Henry's Kleo print in chocolate brown. The bag is lined with chocolate brown corduroy.

I am declaring it the official "year of the tote" for my birthday gifts. I think if I make all totes, I can keep my gifts straight. Some times (especially for birthdays and Christmas) I forget from year to year what I give to whom. I'm going to be consistent this year ... I think. (And if I've already gifted a tote bag to that special someone, I will have to do something else.) 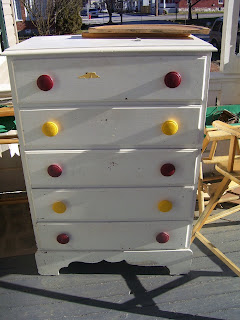 And here is a dresser that we picked up yesterday at the swap shop. For free! Yes, Joe and I made another trip to our beloved county dump/swap shop and found it. It was just sitting there awaiting a home. Of course it needs a fresh coat of paint. But we couldn't beat the price! And it's solid wood. 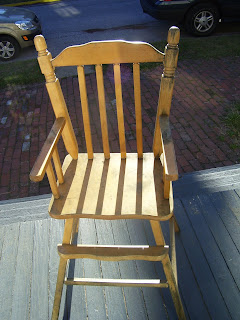 And a little wooden high chair. The broken tray is sitting on top of the dresser (above). This needs a thorough cleaning and probably some sanding and painting, too. But, for free, it's not bad!

I also picked up three mugs and a little bowl/mug or something cute and green from Ikea.

I'd say it was a successful trip!

I originally started this post nearly 2 hours ago. Quite a few exciting things have happened since. The smoke detectors on our 2nd floor started to go off. I ran upstairs (hoping it was a dying battery -- all of the smoke detectors are wired together) and smelled smoke! My heart nearly sank. Spenser and Sawyer were still sleeping and I'm thinking the house is on fire. I checked every room. I think I have narrowed down the smoke smell to Taylor's and Carter/Jack's room (which are connected). The smoke detectors have stopped ringing and the smoke smell is dissipating. I've been suffering some minor stomach ailments, so I was quite surprised at how quickly I was able to move through the house, room to room, sniffing and smelling the smoke. I had to laugh, though, because Mason said the smoke smelled like "waffles."

I called Joe, who was in the middle of his 60+ mile commute. Then I called my firefighter father (who was being visited by my firefighter brother). They offered to come out to investigate, but Joe's father who lives closer (Joe apparently called him as I was talking my father) came out instead. My father said that I may have to call the fire department, but that they would come with sirens, lights, and all the works. I was not ready for that at 8:00 a.m. Nor was I prepared for two messy diapers to change in the midst of the smoke. And the one that had exploded out the back of the diaper.

(My father was supposed to return to work today for the first time since his back surgery. But, he works for our church and they have to approve him from church headquarters first. He is still awaiting their approval. So I feel very lucky that he was home.)

So I'm ready for some normalcy now.
crafting thrifting

Anonymous said…
Oh, honey! Be careful. Call someone to check it out right now! You're making me nervous.

beki said…
Oh gosh, did you ever find out where the smoke was from?
I love that tote fabric. I think making the same gift for everyone is a good idea.
I'm jealous of that wooden high chair. I've been looking for one of those for a few years now. You can't beat FREE.
11:21 AM EST

Anonymous said…
keep us posted, that is weird/scary! why in the world would you smell smoke and then it would go away?
12:52 PM EST

Anonymous said…
Oh that is so scary. Glad everyone is ok, but I sure hope you can find the culprit so it doesnt happen again. Grea score on the dresser and the chair!!!!
3:20 PM EST

maggiegracecreates said…
I found you through a comment on stardust shoes. First time visitor. I will be back though. I would love to know when you post a challenge using the fat quarters.

I would love for you to visit me too.

laura capello said…
you forgot one detail, WHAT WAS THE SMOKE SMELL?

i love that bag! and that fabric. my store had it ages ago and i didn't buy it and now i'm kicking myself because i can't find it anywhere.

and that dresser? for free? and it doesn't smell like cigarettes? i think i may just have to move to your neighborhood.
4:57 PM EST

Karyn said…
You never said where the smoke came from! Inquiring minds need to know :) The tote is wonderful and what luck at the thrift store!
8:48 PM EST

Joanna said…
What a morning you had! And, yes, blowout diapers tend to occur at the most inopportune times.