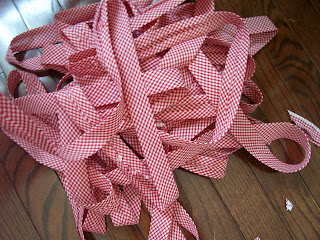 Yesterday I tried something new. Homemade bias tape. Red gingham bias tape. I think I underestimated how much I would love it. I think I thought it would be too time consuming, especially when I can just buy a package of it. Wrong! I love it. In fact, after finishing a project and having leftovers, I'm already plotting my next project to include bias tape. Last night after the last of the last children were in bed, I had some "sewing therapy." It was one of those kinds of nights that you don't want to remember. It started off with my decision to grill hamburgers outside. And ended with four burnt burgers, lightning and thunder, drenching rain, a spider flying right at me (yikes!), tree debris in my hair and on my burgers ... I had to run back outside in the terrible weather to put on more burgers to compensate for the ones that became blackened hockey pucks. Oh, and that was all before dinner. After dinner we had to rush out the door. Of course, this was not without incident.

So what was I saying? Oh, that's right. Sewing therapy. I sewed that patchwork pillow last night. I didn't feel like dealing with a zipper, so I did the envelope back, like Kirsten makes.

And, speaking of Spenser, turns out she likes to pee in her underwear. I would say, "Are you wet?" And she would answer, "I'm fine." (But she was wet!)

It doesn't phase her. Well, it didn't at first. Later in the day I found her later changing her own underpants on several occasions. By nap time, I had washed a load of underpants. As of this morning, I think I need to do it again.
***

Thanks to Rachael for pointing me in the right direction with this nursery rhyme from yesterday's vintage sheet:

Tom, Tom, the piper's son,
Stole a pig, and away did run!
The pig was eat,
And Tom was beat,
And Tom went crying
Down the street.

Karyn said…
That is a very cute pillow, I'm not the least bit surprised that Spenser noticed it was pretty. I can't wait to see what you do with the bias tape!
9:09 AM EDT

christy said…
This comment has been removed by the author.
10:05 AM EDT

Heidijayhawk said…
that bias tape is soooooo cool! did you use a bias tape tool? thought i might need one of those. that pillow is darling...aren't you glad you have a gal who notices stuff like that!
10:17 AM EDT

beki said…
Can you believe that I have one of those bias tape makers, bought it about 2.5 years ago, and have never used it? I love the red gingham. I have loads of red gingham that would make some great bias tape!
10:23 AM EDT

I love the bias tape. I almost bought one of those makers the other night.

Sonja said…
I've been thinking about getting a bias tape maker thingy (haven't found one yet). Did you use one?
Your day sounds like you needed sewing therapy! Hope today is better!
12:02 PM EDT

Anonymous said…
I'm in the I-bought-a-bias-tape-maker-but thought-it-would-be-too-difficult-to-use-so-its-sits-in-a-drawer club too. Now, though, I may be inspired to break it out for a long standing WIP.

Lovely pillow. Don't you just love it when they give you their approval?!
12:26 PM EDT

Anonymous said…
Good gob!
I love home-made bias tape. So fun! I have the tape maker in 2 sizes, but honestly, it is just as easy to fold it over by hand, especially for the wide width.
As for your night - oh honey! Hurry home Joe!
And good luck with that potty training. We've finally gotten Eliot to give up diapers at night. That's one expense I'm happy to be without. :)
12:30 PM EDT

Making your own bias tape is so much cheaper than buying it, but I can never seem to make myself do it either. Hmmmm.
1:16 PM EDT

Me and Him said…
The bias tape of very pretty, very summery.

I never thought of making it myself, although I don't use it much.
3:28 PM EDT

laura capello said…
i can barely take a shower and you can raise six kids while your husband is out of town AND make bias tape.
3:28 PM EDT

Berber said…
The bias tape is fabulous!
Was it difficult to make?
5:14 PM EDT

SilverLining Designs said…
Bias tape is great and even better when you make your own (and so easy). So many more choices than just a solid colour. I always make my own. That gingham would be great on so many things. That pillow is pretty...those fabrics together are so nice.
8:50 PM EDT

nikko said…
I'm with capello. When my husband is out of town (even for one night) it's all I can do to maintain the lowest level of sanity.

But, I have to say your bias tape is lovely! I love making my own. It looks so much better on outfits to have matching than plain white stuff.
10:42 PM EDT

Anonymous said…
I'm guessing you used the bias tape thingy (based on the other comments). So how exactly do you use it because that looks like something I would like to get addicted to, too!

And I sympathize with your crazy day. The flying spider alone would have had me crazy!
11:00 PM EDT

Anonymous said…
I wrote an entry on my blog about how addictive bias tape making can be! You are so right. :-)
2:01 AM EDT

stryker said…
I'm looking for pink & white gingham bias tape. Would anyone like to make me some? I will pay for it? Pease.
8:18 PM EDT