June 28, 2007
Thank goodness it's Friday. Joe came home last night, after being out of town this week. 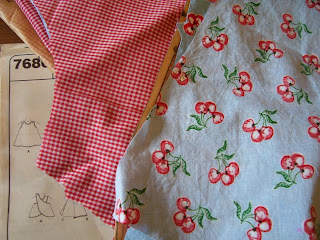 One of the first things I did was cut out some fabric for a new outfit for Spenser. I have been feeling very sewing-deprived lately. (I was also feeling sleep-deprived, but what's new? That always happens when Joe is away.) 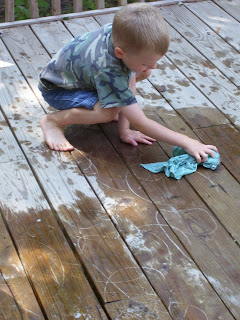 Yesterday afternoon Mason and Spenser played outside with a bucket of water, the kitchen set, and some old rags. I peeked out of the door and found Mason scrubbing the deck. Incidentally, a few months ago he and Jackson took crayon to the deck and made a very horrible mess. You can see some of the swirly remnants of the great crayon adventure in the wet spots. We had told the boys that when the time came, they had to scrub the deck to remove their crayon creations. I guess this is part of Mason's WIP.

I think I forgot to mention that Carter and Jack are at "art camp" this week at their school. For only $5 per child, they have gone every morning this week from 9-11 a.m. and had a blast. They have been working with clay. On Monday they built castles; Tuesday - unicorns; Wednesday - dragons; Thursday - shields. I think they thought today was knights or swords (although I can't believe they'd make weapons at school). I won't be able to show their WIPs until next week or so, after everything has been fired in the kiln. I can't wait to see what they created all week.

Our school has five weeks of camp this summer. All for only $5 a week per child. A local (large) business donates money to the school to pay for all other expenses, including the teachers' salaries. They also have drama, computer, and two weeks of sports camp. My boys are going to do one week of sports camp (which they usually do each summer). The other camps were either scheduled during other summer plans or they weren't interested in (drama camp). Just one more reason I love my small town.
family fun WIP

Karyn said…
I'm glad (for you) that Joe is home!! The cherry fabric is so cute Lera!! I can't wait to see the finished project.

Anonymous said…
Okay, now do you get the spa trip? And ACK! Cherry gingham goodness!

I love your small town too. Those camps sound great - and the price is certainly right!
12:00 PM EDT

beki said…
Wow, what great camps for the kids!

Anonymous said…
i can't wait to see what that cherry/gingham combo is going to be. so cute!
3:19 PM EDT

Anonymous said…
What a wonderful opportunity for the kids. Love your fabric!
3:47 PM EDT

Heidijayhawk said…
i wish our schools did that! so fun. and i'm still lovin that cherry goodness!
11:18 PM EDT

hooli said…
I just found your blog and am fascinated. So many kids, so many projects. I'm gobstopped impressed. I didn't even know seamstresses like you still existed -- and I know a LOT of Daughters of the Utah Pioneers. What's your secret? Teach me!Teach me!Teach me!
1:30 PM EDT