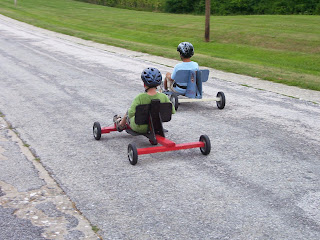 This is Carter (left) racing his cousin. 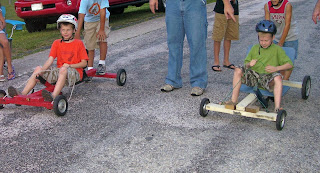 Each boy raced two times. The final race was between my two boys, Taylor (left) and Carter (right). I don't have any pictures of the actual race because I videoed it on my camera. Let's just say that there was a near accident. Carter started off with steering issues (from the boy who pushed him) and sharply cut in front of Taylor, who somehow missed colliding into him. Carter veered off into the grass and Taylor continued down the hill. Carter's pit crew helped him back on the "track" and he almost finished the race, before running off the road again before the finish line. It was quite an adventure. My heart stopped beating on occasion. 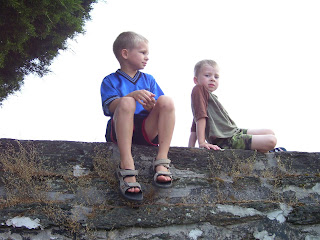 Jackson and Mason were too little to ride, so they sat on the stone wall of the cemetery and were spectators. Sometimes they ran down the hill to "help" the bigger boys bring back the go-karts. Mostly they hitched a ride on the way back up.
family fun

Anonymous said…
Okay, we need to see that video. I am sure you are in for many more heart-stopping moments as the mother of five boys. Although it may be your girl that stops your heart the most. Time will tell. :)
10:49 AM EDT

Anonymous said…
i can see my 3 year old boy doing this kind of stuff when he is older and i get gray just thinking about it. still, it looks so fun!
11:32 PM EDT