To Heck and Back

June 06, 2007
It's been something else around here the past few days. A lot of bickering, quarreling, arguing, and bossiness. With Joe being gone, it's starting to take its toll on the children. The school year is wrapping up within the next week. The children are getting burned out from school, karate, and scouts. Everyone needs a break (including me).

This morning two boys were fighting over the same cereal bowl. One had it. The other wanted it and took it. (A cereal bowl for Pete's sake!) Things like that. But it's been constant for two days. Yesterday it was Legos (I think). The same two boys. The Legos were confiscated and they were sent outside to play.

This kind of stuff happens at the end of every school year. It makes me wonder what the summer break is going to be like. Makes me scared, too.

Anyway, after getting them to bed around 9:30 last night (their bed time is 8:30, for my sanity and it was an hour past), I was just in a bad, kind of funky mood. Dinner dishes were still out (it was a karate night). There were toys everywhere (even though I picked them up 100 times yesterday). Pillows and sofa cushions were askew (this drives me nuts). I think there was still a load of laundry in the dryer waiting to be folded (it's still there). I just wanted needed some down time.

I did what I could around the house and decided to start sewing. It's the first time I've sewn since Joe has left. I just haven't had time or energy. Last night I needed to do something. It was 10:00 when I started and maybe midnight when I stopped. 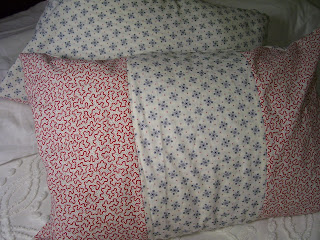 I made two small (travel-size) pillow covers with zippers. The front on both look the same with the red and white swirls on the ends and a red/white/blue fabric in the middle and on the back. I picked up these fabrics yesterday at Jo-ann. They aren't what I had in mind, but they'll do. I really like the red/white/blue one. It was part of their "vintage" collection and it does have the feel and charm of vintage. (Sorry the photo is so dark. We have a lot of very large, mature trees around our house). 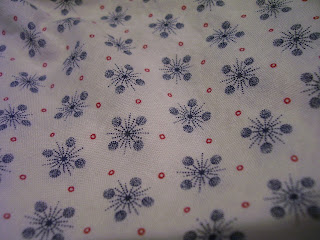 There are some issues with the pillows. My mind was obviously elsewhere because I had a hard time sewing on the zipper. The pillow covers are a little baggy (I may have to fix that). But it was all therapeutic.

I even made Sawyer an outfit, but I'll post that tomorrow (maybe). It's nothing you haven't seen before.

Katie Jean said…
Oh Lera, I hope you get a break soon! I don't know how you do it. You are one amazing woman, I tell you!

And the pillow covers look great. Zippers are always tricky!
8:49 AM EDT

Anonymous said…
i'm so sorry - today will be better!
you need one of those british posters (that i want) like ali's:
http://domesticali.blogspot.com/2007/06/diy-beauty-treatments.html
9:22 AM EDT

Heidijayhawk said…
keep your head up sweetie! he'll be home soon and school will be out and things will pass by so quickly. breathe...breathe...at least get a chance to try! thinking about you!
10:26 AM EDT

Anonymous said…
We had an argument over a ceral bowl at our house this morning too! (Note to self: Must buy more bowls with straws.)
But the sewing IS theraputic, isn't it. Nice results, mama.
Now take away their ceral and tell them to go play outside. :)
10:27 AM EDT

Amanda Jean said…
oh, you poor dear. I soooo know how it goes. We have about 3000 Legos and the boys have to fight over the same stinkin' one. It is unbelievable.

your pillows are cute. glad you had a little sewing/therapy time. :) hope things settle down soon.
11:37 AM EDT

Anonymous said…
A change is coming and the kids will calm down as their summer gets started. Hold onto that thought! Your pillow cases turned out very pretty.
2:28 PM EDT

Anonymous said…
Lera,
I'm happy to have some good news for you ;-) You might not have received my email on Monday, but you are one of the winners of Free Fabric Friday. Please send me your choice of 1 yard of fabric and your address and I'll send you your fabric.
2:41 PM EDT

Anonymous said…
Therapy is definitely necessary when you're a single mom, even if you're only a single mom for a week. I have to spread my kids through out the house for an hour a day just for my sanity. They get one quiet toy (ie Tinker Toys) and they have to just play quietly until time is up. I need that time. I REALLY need that time, and my hubby is always in town! I hope you can find another break today.
3:27 PM EDT

Anonymous said…
I can only imagine... Maybe tomorrow will be a little better.
8:36 PM EDT

Me and Him said…
I cannot imagine. I hope tomorrow is better.
2:08 AM EDT

beki said…
I can only imagine! I was about to go crazy with my three last night, and that was only for 1 night. I probably should have tried to sew, maybe I would have accomplished something.
9:26 AM EDT