Happy Birthday to Me. Again! 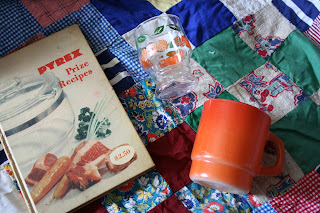 Yesterday it felt like my birthday all over again. I stopped by my mother's house after boot shopping (see below) and my sister had dropped off a gift for me.

Look at this vintagey goodness. A Pyrex cookbook from 1953 (!), a small orange juice glass, and a FireKing mug (which I already used for my chamomile tea). The book was dedicated right to me: 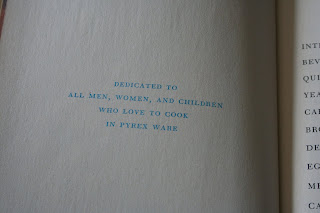 And it was full of great recipes. I can't wait to try this creamy marshmallow frosting: 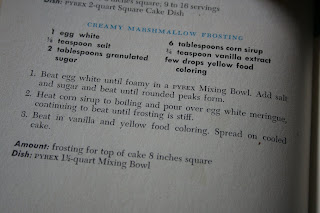 Thank you, Kate. I love it all. It's the best cookbook I own. My new favorite. 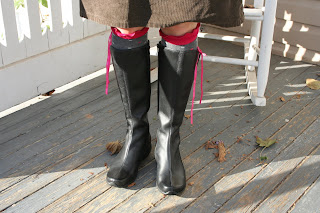 I received some money for my birthday a few weeks ago and decided I was going to buy myself something I normally wouldn't. The money started to dwindle away (on root beer float ingredients and school field trips), so I knew I had to act quickly.

I couldn't decide what I should buy. This only happens once a year, so it's gotta be the right decision. I considered a nice pair of jeans (which I promised myself I would buy this season) and a pair of boots. I searched online and all the boots I liked were $3-, $5-, and $700. Way too much. Waaaay too much.

I decided I would check Marshalls while Spenser was in preschool. I immediately found a pair that I liked, but wasn't sure if it was a good deal or not. I thought I'd check Kohls before making any decisions. So, Sawyer and I drove to Kohls. It was then that I realized if I knew I was getting a good deal, I would be happy buying the first boots. I called Joe and asked him to google the boots to see what they were selling for. Turns out, they were a bargain! (But still the most expensive footwear I own.) I didn't find anything in Kohls that compared to the Merrells, so I went back and snagged the only pair in my size. It was fate. They were meant to be mine.

Katie said…
I'm happy that you love it! It makes giving the gift so much better! Love ya! Katie
10:01 AM EDT

nikko said…
Sweet boots! I know what you mean about birthday money. I got some birthday cash and it got used on Sonic slushes and school lunches and babysitters waaay before I used it on fabric. LOL.

Anonymous said…
congrats on spending your money in a big chunk! the boots look great.
10:43 AM EDT

Jack said…
Swanky boots! Enjoy them. It's fun to have a treat just for yourself.
11:40 AM EDT

Amanda Jean said…
the cookbook IS dedicated to you. how sweet is that? and I love the boots. how could I not? what a great thing to get such a great deal on them, too.
2:39 PM EDT

April said…
You are so lucky with thrifty stuff. I can't find pyrex at my thrift stores to save my life. Happy Belated birthday. oh, and I am HOOKED on fancy pants now. My two year old laughs his butt off while I play.
4:01 PM EDT

Diane said…
Great pick! Glad that you got yourself something you really wanted. I think that Merrell's are super comfy too. And cute!
4:16 PM EDT

Little Munchkins said…
I love those boots! I am a big fan of knee high boots myself :)
6:13 AM EDT

FinnyKnits said…
Good boots are always worth it! And, tell me they're not awesome. Just try. Love!
8:02 AM EDT

Two Dogs and a Quilt said…
I wish I'd seen this post earlier...I have these exact boots! I got them for my birthday a year ago from LL Bean and they might be my favorite and most comfortable shoes ever. So great for fall and winter. Enjoy!
2:41 PM EDT

* said…
You have great taste in footwear, girl. Merrells rock Kohls anyday. I have a pair of Merrells I brought with me to England last month and they were perfect.
4:40 PM EST