June 22, 2007
My children have been getting along surprisingly well so far this summer. And they are trying new things. I love these moments that I captured. 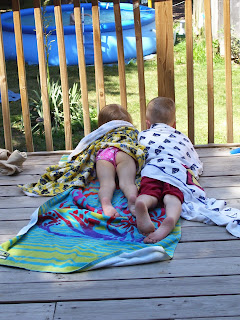 Spenser and Mason watching the big boys in the pool and on the trampoline. 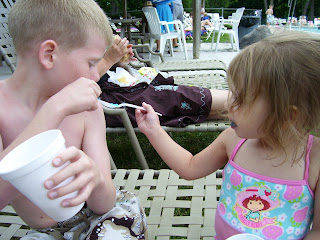 Spenser feeding Carter her sno-ball. (And if you look closely near his elbow, you will see that she spilled some on his swim trunks. I think that's why he looks so afraid of her.) 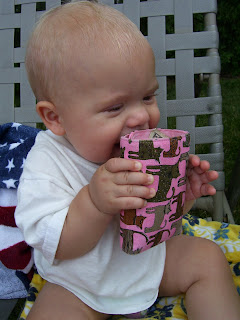 My way of keeping Sawyer occupied for a few minutes while taking pictures of the other children. (Don't worry, my wallet doesn't have any coins that he could choke on.) 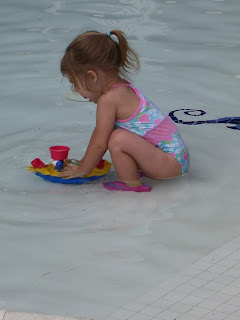 A trip to the pool with a friend. It took almost all day before Spenser was brave enough to go into the water. She liked hanging out on the side of the pool filling the watering cans and buckets. Once she was in, I couldn't keep her out. Unless I was taking her to the bathroom for the millionth time. 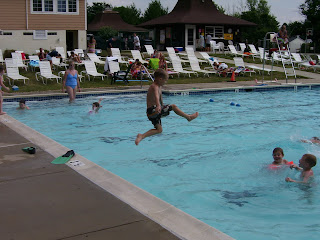 Jack caught mid-air ... This year is a first for him. 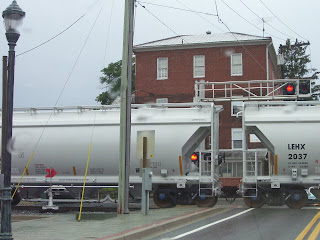 Thunder and rain ended our pool day a little too soon. On our way home, we got stuck by the train on Main Street. We never seem to mind waiting for the train to pass (unless someone has to go to the bathroom). 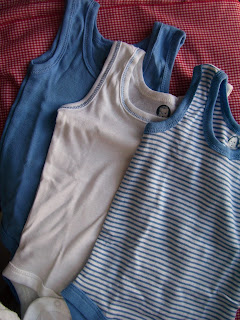 And look at these adorable tank onesies I found at Walmart (3-pack for about $6). Won't they look so cute appliqued? If you are interested in them, you better go quickly. I only found one package of boys 12-months (they were out of 18-months) and I was told they only get one shipment per summer. When they're gone, they're gone until next summer.

(P.S. They also have girly ones. They aren't with the regular onesies, they were on a free-standing display kind of thing.)

utmommy said…
You have a beautiful family!

I browsed your blog for a while this morning and you've got some really fun sewing projects and great ideas to keep the kids busy during the summer. I may have to steal some of your ideas!!
9:51 AM EDT

nikko said…
You captured some great shots. I'll have to look for those tank onesies next time I'm out shopping!
10:03 AM EDT

Sonja said…
That looks like a perfect summer day!
10:04 AM EDT

Anonymous said…
I wish I had a strawberry shortcake swimsuit.
11:23 AM EDT

Karyn said…
Lera, your photos are amazing. It look like it was an awesome day.
2:03 PM EDT

Heidijayhawk said…
my kiddos are doing pretty well together this summer so far. we'll see...only a thrid of the way through!!!
2:28 PM EDT

well, looks like i'm making a walmart run tomorrow. because, you know, i need another project.
11:37 PM EDT

Amanda Jean said…
hurray for your kids getting along this summer. Something to be thankful for, for sure! looks like you all are having a blast.
9:51 PM EDT

Im going to keep my eye out for those onesies. I've gotten on an applique kick.
8:52 PM EDT

Anonymous said…
Looks like they're having a wonderful summer :)
5:37 AM EDT

Anonymous said…
We have the same little pool in our backyard! We love it, although it is waaay too easy to make fun of (poor guy) and I refer to it as "a kiddie pool on steriods". Hali and I (and Jeremy sometimes) have a LOT of fun in it though!
3:46 PM EDT