June 18, 2007
Joe is home. He came home Friday night. Earlier than I expected. He caught an earlier flight home from El Paso, where he was attending the Sergeants Major Academy. He was supposed to go last year, but he broke his arm just weeks before he was supposed to leave. I guess it all worked out in the end.

While Joe was away, I had a secret Work in Progress. You've seen snippets of it, but I was pretty tight-lipped about it, as to not ruin the anniversary/Fathers Day surprise.

I painted our bedroom. It used to be purple. Now it's a light aqua. I love it.

I won't go into detail about the first wrong color choice (that made me feel like I was living in a swimming pool); or the fact that I had to sand and prime several times; or that I came down with mastitis in the middle of this project; or that my friend, Kim, came to the rescue and painted trim while I had a bruised palm. The fact is, it's finished ... almost.

Every night while Joe was away, I burned the midnight oil. I painted or cleaned or sewed or moved furniture every night (except the night I was the sickest). When he came home Friday night, a night early, I hadn't finished. 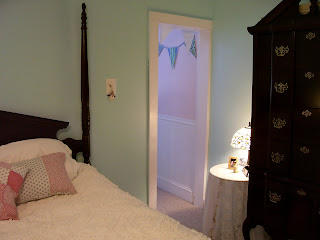 This is the direct passage into Spenser's bedroom and the baby's makeshift nursery from my side of the bed. 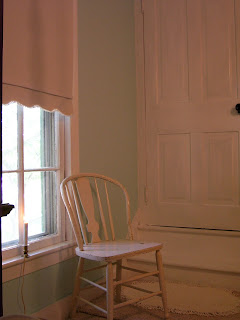 A corner where the attic steps are in our bedroom. I really want to get a wooden chair and paint it red. I think. I still need some type of window treatment (which was scheduled for a late Friday-night sewing extravaganza). And when I finally find a chair I want, I will make a seat cover. 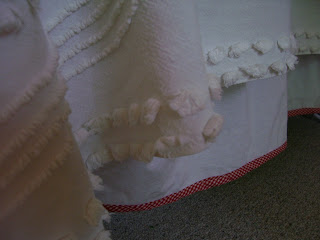 And this is where all that red gingham bias tape went. I bought a white, simple dust ruffle and added bias tape along the edge.

Joe was pleasantly surprised. He can't say I didn't warn him.
corners

Anonymous said…
i'm still in shock that you made all that bias tape! looks great! old houses are the coolest - what great corners you have!
9:59 AM EDT

Sonja said…
Wow! It looks great and I'm really impressed with your hard work! You go girl!
11:05 AM EDT

Anonymous said…
Red and aqua are my favorite! I can't believe you, woman!

Katie Jean said…
It's so pretty! I think it's similar to the color we have in our room. It's such a soothing color. I'm impressed with all your hard work and all that bias tape!
11:31 AM EDT

beki said…
It's beautiful Lera! Now you're making me feel like a slacker. You wanna come over to my house?
12:03 PM EDT

Berber said…
What a wonderful, sweet surprise... it all looks great!
4:32 PM EDT

Anonymous said…
It looks beautiful Lera! I love the bias tape and YES do a red chair in there. :)
5:02 PM EDT

Anonymous said…
Pretty, pretty! I'm sure he was thrilled. Like you don't have enough to do...

Happy Anniversary to you both!
5:29 PM EDT

Amanda Jean said…
beautiful! I can't believe that you took on this project while he was away.

I love the color you chose, and love the red splashes here and there. It's great! That red bias tape on the bottom of the white ruffle is perfect.
7:10 PM EDT

nikko said…
Oh my gosh. You are amazing. Do you ever sleep?

Me and Him said…
It looks amazing. I can't believe you did all that work, and ere sick, and had all 6 kids on your own.

Anonymous said…
It's a beautiful color, Lera! And I'm so glad your hubby is home. I still don't know how you managed to get it done, since when he was gone you were still doing so much other stuff. Super woman - that'w who you are!
1:38 PM EDT