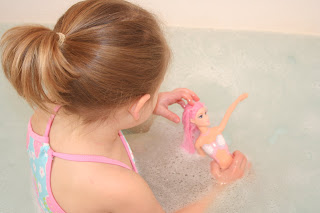 Last week while Sawyer napped, Spenser dressed in her bathing suit and went "swimming" in the bathtub. We tinted the bathwater blue, added bubbles, and her mermaid Barbie.

I have a problem. Sawyer is almost 18 months. He has had a cold since Friday-ish. He went for a well-checkup on Monday and was fine (besides a heart murmur, which is how Carter's problem was detected, but that's another story). Anyway, he still nurses. Or. Used to. I think his ear is bothering him. He wants to nurse. He says, "noirse," or tries to pull up my shirt. He opens his mouth and then turns his head (and sticks his finger in his ear). This has been going on for almost two days. He has had no fever and his cold is essentially gone, except the runny nose. He has another appointment today, so I'm hoping we'll get some answers.

In the meantime, I'm about to explode. I pumped a little last night. I don't remember pumping being so painful.

None of my children weaned themselves. Especially so abruptly. I don't know if he is on a nursing strike or if this is the end of an era. If he doesn't make up his mind soon, my body might naturally make the decision for him.

nikko said…
Swimming in the tub! What a fun idea.

Sorry about Sawyer. None of mine did that before. It sounds like his little nose or ears are bothering him maybe? Hope he figures something out soon and you're not in too much pain. Yowie!
10:10 AM EDT

Karyn said…
Spenser is such a little sweetie! That looks like fun.

I'm sure the doc can help you figure the Sawyer mystery out. Poor guy.
10:24 AM EDT

misschris said…
Swimming in the tub is fun! I bet Spenser loved it. Cool mom.

utmommy said…
So sorry. Hope things get better for the both of you.

Anonymous said…
Pump what you can hun to avoid mastitis. It does sound ear-ish. The Dr will probably check the full Ear nose and throat to get to the bottom of it. Poor lad doesn't sound like he is ready to wean as he is asking for milk. Hope it's sorted soon.
3:40 PM EDT

Anonymous said…
how clever to color the bathwater and everything - but i am curious - was it hard to scrub out?

Shannon said…
Nothing like taking a dip in the tub!

All I can say about your nursing problem is good for you for doing it until 18 months. What a woman! Hopefully he will start feeling better and your boobs will too!
3:53 PM EDT

hooli said…
oh oh oh... it's always a nostalgic moment when the restaurant closes up shop. good luck with whatever he decides. and i hope your chest forgives you eventually.
11:15 PM EDT

Little Munchkins said…
I remember how painful engorgement can be, poor you. I don't think your supply will dry up so fast would it? I stopped BFing DD 2 months ago and there is still milk.

Hope it will all sort itself out for you soon.
4:15 AM EDT

Lyssa Beth said…
Weaning is never fun!!
I just want to say that I LOVE your blog, your posts and the things that you make. You are so inspiring!! It's always nice to see a fellow LDS-ian doing such great things with family. Thank you!
Lyssa Z.
8:50 PM EDT