Dress Up and Happy Mail 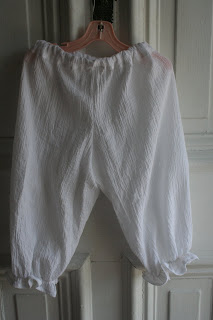 On Monday night I sewed a little bit. I've had this pattern hanging around forever and decided it would be fun to make Spenser some more dress up clothes. This goes perfectly with her mob cap dress up stuff.

It was a quick sew except for the elastic. I assumed it was supposed to have a casing, either a rolled one or one of bias tape. It had neither. I had to stretch (or attempt to stretch) the elastic and sew it on. One side is okay. The other is not. I didn't pull it taut enough and ran short. I was afraid I would destroy the fabric if I ripped it out, so I added a small piece of elastic to the elastic and continued on.

Spenser loves it. When I gave it to her, she looked at the pattern package and asked, "Where's the shirt?" There is a camisole to go with it. She wants one. She will get a modified version of it. The one with this pattern has buttons up the back. Not very easy for dress up play. So, yes, she will be getting her matching shirt. 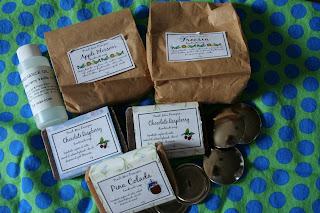 And yesterday I had the great pleasure to get this lovely parcel in the mail. It is from Karyn, one of the most generous people I know. She's been on a soapmaking quest lately and sent me a bar of each. Apple Blossom. Freesia. Pina Colada. And two bars of Chocolate Raspberry. Why two bars? Because chocolate-raspberry anything is my favorite. Hot chocolate. Candy. Mmmmm. She also sent along some large covered buttons so I can make more pendants and some black raspberry vanilla fragrance oil so I can make my own chocolate raspberry soap. Thank you, Karyn. I'm not worthy.

Karyn said…
VERY cute bloomers! And I agree with Spenser, of course she needs the matching top!

And I'm glad you like the soap. At least you didn't get ANOTHER bar of Sewer Sludge (special edition). I should have given you another bar of that crap just to be funny.
9:10 AM EDT

What a sweet package to receive. I bet it smelled wonderful! xo
11:36 AM EDT

Anonymous said…
What exactly is the difference between bloomers and pantaloons? I wonder strange things. Those are very cute! We'll need to see a picture of Spenser in the whole outfit one day. And what great mail! That chocolate raspberry (one of my favorites as well) soap shoud banish the smell of meat forever. :)
11:37 AM EDT

i really need to get busy. we are so into Little House right now!
9:05 PM EDT

Little Munchkins said…
I love bloomers. I think it looks so cute on little girls. Spenser's right, she needs the top too. I can just imagine how cute the whole outfit will be.
9:21 AM EDT

Chara Michele said…
cute bloomers! I agree too that she needs the matching top :)

Lucky you! That looks like a wonderful package from Karyn :)
7:44 PM EDT