Another Tuesday comes and goes ...

March 14, 2006
While I was upstairs dusting my bedroom (with Spenser running by my feet), I left Jack and Mason downstairs to watch TV. When I came downstairs, both boys were sleeping. It was against my better judgement to let them sleep because they may not want to sleep tonight, but they were both so grumpy today that I thought a little nap might do them well. 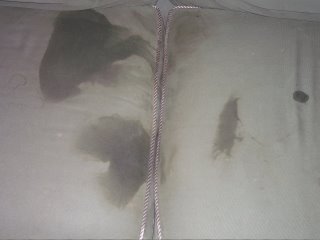 This is my couch. Those are wet spots.

Jack woke up first, groaned, and covered himself with a blanket. I became suspicious and pulled back the blanket to reveal that he wet his pants during his nap. When I yelled "get up!" Mason woke up and revealed his wet spot. Yep. Two for the price of one!

And this is where boys who pee their pants while sleeping on my couch are banished: 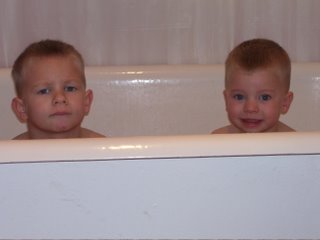