We've all been suffering with colds. Spenser has made everyone sick. She was the first one to get it. Then Mason, Joe and I. Taylor complained yesterday (Friday) that he was suffering from "allergies." I gave him some medicine before school and sent him anyway. I thought if I told him I thought it was a cold, he would want to stay home.

Last night for "family movie night" we watched March of the Penguins. It was a very cute movie. All the children enjoyed it ... even Spenser. She loves to look at animals.

This morning was Taylor's cub scout "pinewood derby." Taylor won the "best looking award." His was a copperhead. I think he really had a good time. Cousin, Alejandro, won 1st place. 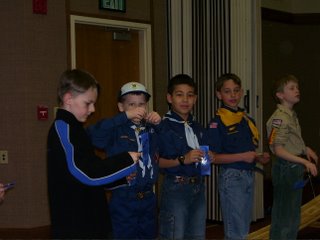 This afternoon I decided to get my sewing machine back out. I've been wanting to make a few maternity skirts, but have been unable to find any pattern that I like enough. Some look like tents or are just plain ugly. I asked Christy to help me, but she just suggested I buy pre-made non-maternity ones or look for non-maternity skirt patterns with an elastic waist.

I really need maternity, though, because I become "all belly" when I'm pregnant (or so it appears -- it hits my thighs and hips, too, but it's not as noticeable). So, after looking at a few more patterns yesterday, I found one. I traced a maternity panel from a pair of jeans and tried to add that to the skirt. It looks okay, but a little too big and the panel is visible at the bottom with my non-maternity shirts (for now). I didn't have the right size elastic, so I used one not as wide, which I will have to replace. Here it is: 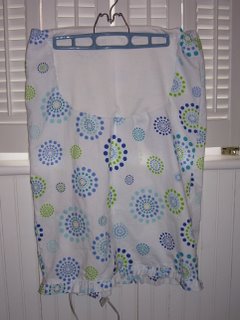 I really would like to make a simple a-line skirt, one that is comfortable to wear, even around the house. This skirt (which I made larger than my regular pre-pregnancy size) is a little restricting around the ruffle when I try to climb over the baby gates (which encompass most of my house).