March 22, 2006
Last night at 9:00 p.m. Taylor informed us that the project we thought was due on Thursday (3/23) was actually due today! It's true that we've known about it for 2-3 weeks and I kept asking him if he was working on it. It just never really got done. Rough drafts of this project were drawn. Supplies were purchased. That's all.

So then it started. From scratch. A miniature "parade float" on the state of Delaware. Luckily Taylor had been doing the research and could spout off many state facts. We just had to put it in 3-D. The floats will be on display in the school cafeteria on Friday from 2-3 p.m. Taylor will be with his float, ready to answer any questions one may have about Delaware. 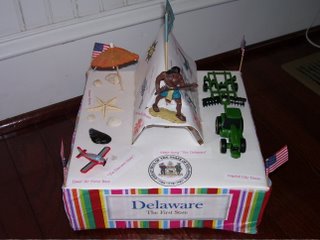 Then today, while Jack, Mason, Spenser and I were eating lunch, the school called to say Carter was in the health room with a bellyache. I went to pick him up (he grinned and seemed okay, but I brought him home anyway) and as we were about to walk out of the office, Taylor was walking into the office. I said, "what's wrong with you?" fearing that he had a stomach ache, too (which was making me sick just thinking about my children throwing up) and he said he got poked in the eye with an unknown object. He went in and sat down in the chair in the health room, and the nurse thought it was still Carter. We had to explain that it was my other son (with a very similar army shirt on). She checked his eye and sent him back to class.

Carter is fine. He was banished to the "back room" (or the spare room) for most of the day and was allowed to watch TV with a trash can by his bed. He is fine. He better be fine. He has a field trip to the hospital tomorrow.