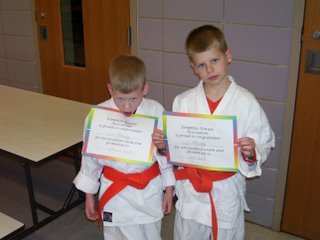 Taylor and Carter had their karate exam tonight for advancement. Both boys started this session as orange belts. After completing their third session tonight (and this only being their second exam) they advanced!

Carter is now a yellow belt and Taylor is a red belt (he advanced two belts). Woo Hoo!!

They only earned certificates tonight, but will get their belts at the beginning of the next session, which begins April 11th. (The instructor did not have the children's sizes to get them in advance.)

We are soooooo proud of our little men.

Despite the look on their faces, they were both very excited. They were too excited to smile simultaneously and this was the only picture that was in focus and they were both looking at the camera.