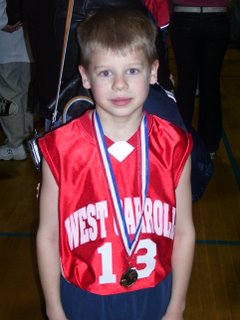 Taylor after losing the championship game on Saturday. He still received a medal after the game, as well as a trophy (like Carter's) from the basketball awards banquet. I don't think he cared that they lost. Look at that cool medal!!!

By the way, he really wasn't this "down" after losing. I think he was more "down" that I kept trying to take his picture. The gym lighting is terrible and people kept getting in the way...

(I think I'm smiling more than they are! Basketball season is over!)