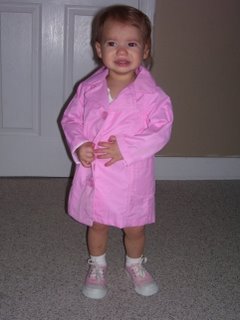 Jack and Mason quietly playing with the marble run. I put it together, but they helped to find the right pieces (using the diagram). All three of us had a fun time. (They wanted to make the "150-piece" run, but I talked them into the one that had just over 30 pieces. Whew!) 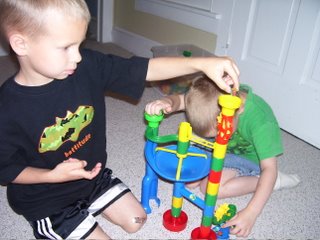 On Saturday, Joe was on the ladder trimming some tree branches and the ladder shook, sending Joe to the ground. He scraped up the inside of his upper arm (even with a t-shirt and sweatshirt on) and heard a "pop" when he landed. He almost blacked out from the pain. Then he was nauseated, hot, cold, etc. We almost took him to the ER, but after all of that passed, he got up, walked around, and felt a little better. He went to see the post doctor today (before work) and they x-rayed his shoulder but did not find a break. They said they think it's "soft tissue damage," and not to do any PT for 2 months. If it is not better by then, they will do an MRI because tendon and ligament damage is not visible on x-rays. He was supposed to go to Sergeants Major Academy at Fort Bliss, Texas in June, but that would require extensive physical exercise, so he will have to postpone it. I can just see it now -- the Army will send him in August/September, when I'm about to have this baby (or right afterwards). That's how it always works with the military!

laura capello said…
Ack! I hope he didn't really hurt himself, and that he's just sore for a few days.

And I especially hope he doesn't leave around the time the baby is born!
8:17 PM EDT