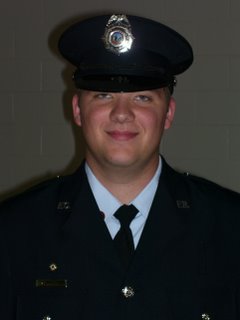 Last night my brother, Andy, graduated from fire academy, along with 18 other men. We are so very proud of him. He was able to endure the 18-week-long academy, in bootcamp-like conditions.

Andy is 21 years old and first became interested in fire & rescue when he was young. (Our father is a retired firefighter.) Andy joined vo-tech in high school, where he was trained in fire and rescue, becoming an EMT at an early age. Andy has been a volunteer at his local fire department since high school. He has won many awards and offices because of his experience, including Firefighter of the Year.

On Thursday, Andy will start his first career firefighting. He will be working in a city (not a big city like Baltimore, luckily) on the ambulance. We are told that all new recruits are "stuck" there first.